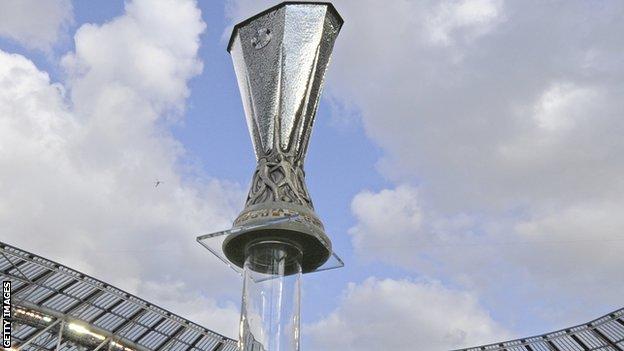 Liverpool will face either FK Renova or FC Gomel in the third qualifying round of the Europa League.

The Reds were last in the competition in the 2010-2011 campaign when they were beaten by Braga in the last 16.

The first leg will be played away from home on Thursday 2 August, with the return fixture a week later.

In the Champions League third qualifying round, Celtic will play either Helsinki or KR Reykjavik while Motherwell tackle Panathinaikos.

Who are Gomel and Renova?

Liverpool secured their place in the Europa League draw after winning the Carling Cup last season, but had to enter the competition a stage earlier than expected after Chelsea's Champions League final victory.

Belarusians Gomel have the advantage in their bid to reach the third qualifying round as they lead Macedonian side FK Renova 2-0 from the first leg.

Gomel have Vyacheslav Hleb, the brother of former Arsenal midfielder Alexander, in their squad and finished third in their domestic league last season.

Renova, meanwhile, finished fourth in the Macedonian First League. They lost on penalties to Northern Ireland's Glentoran in the first round of qualifying for last year's competition.

Dundee United will play Dynamo Moscow while St Johnstone will face Marseille, but only if they overcome a 2-0 deficit against Eskisehirspor.

Last season's beaten finalists Athletic Bilbao will host either Slaven Koprivnica or Northern Irish side Portadown in their first-leg fixture, while a trip to Romania awaits Ireland's Sligo Rovers, who will play FC Steaua Bucharest if they can overturn a 3-1 first-leg defeat by Spartak Trnava.

Scottish Cup winners Hearts will enter the Europa League at the play-off stage.

In the Champions League third qualifying round, Celtic are at home for their first-leg fixture against either HJK Helsinki or KR Reykjavik.

Finnish title holders HJK comprehensively beat Icelandic side KR 7-0 in the first leg of their second qualifying round.

Meanwhile, Motherwell, who were unseeded in the draw, face a tough task in their maiden Europa League venture against 20-time Greek champions Panathinaikos. The first leg takes place at Fir Park.

Shamrock Rovers will face a stern test against Belgian outfit RSC Anderlecht, should they progress to the third qualifying round.

The Irish side go into next week's second leg against FK Ekranas of Lithuania with the tie poised at 0-0.

Welsh Premier winners The New Saints will play either Montenegro's Buducnost Podgorica or Poland's Slask Wroclaw if they overcome Helsingborgs. The two sides drew 0-0 in their first-leg games earlier this week.

St Johnstone or Eskisehirspor vs Marseille