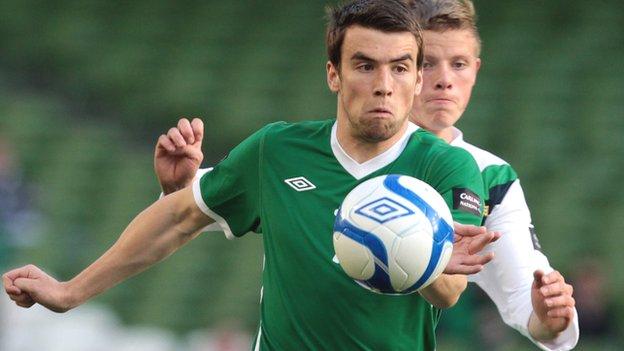 Republic of Ireland boss Giovanni Trapattoni has named a youthful squad for next month's friendly against Serbia in Belgrade.

Skipper Robbie Keane, Shay Given, Richard Dunne and Stephen Hunt have been left out of the 23-man panel.

Marc Wilson, Seamus Coleman and James McCarthy are among those given a fresh opportunity by Trapattoni.

Kevin Foley, dropped from the Euro 2012 squad after being named in the original panel, has declined a place.

"This game offers us an opportunity to try out younger players ahead of our World Cup qualifiers," said Trapattoni.

Wigan midfielder McCarthy asked not to be considered for the Euro 2012 finals because his father was undergoing cancer treatment.

The friendly is the Republic's first game after a disappointing campaign in Poland and Ukraine.

The Irish start their World Cup qualifying campaign against Kazakhstan on 7 September.

"I have decided to leave some of our senior players out of the squad for this fixture," he added.

"Serbia are a very good team with a great football heritage, and will provide us with a great test before our game against Kazakhstan in September.

"I am looking forward to working with each of these players next month. As we prepare for a new journey for this team, it is important that we remember our last campaign as we build for a brighter future."