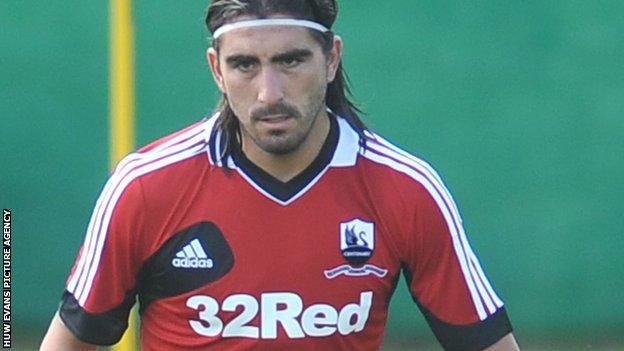 Swansea City will benefit greatly from recruiting three players with experience of one of the world's best leagues, says defender Angel Rangel.

"They will bring experience of playing in the top flight," said Rangel.

"That was in another league but they have experience of playing important games. That's something you need."

Rangel has been at the forefront of the Spanish connection that has accompanied Swansea's rise up the leagues over the past five years.

The 29-year-old was brought from Spanish second division side Terrassa by previous manager Roberto Martinez in 2007, helping the club to the League One title in his first season.

Laudrup, who spent seven years as a player and three years as a manager in Spain, has followed Martinez by recruiting from a league he knows well as he prepares for life in the Premier League.

Spanish defender Flores, known as Chico, has made his name playing in his homeland, although he arrives at Swansea for an initial £2m fee from Italian side Genoa.

And De Guzman, a Canadian-born Dutch Under-21 international, has spent two seasons in La Liga, one of which was under Laudrup at Real Mallorca.

"Chico is someone that can command things at the back and I think he is a leader," said Rangel. "You need a player like this.

"Then you have Jonathan de Guzman, who is a quality player. He breaks lines with the ball and gets in quality positions."

The third new recruit is Spanish attacking midfielder Michu, who has been prized away from Rayo Vallecano for £2m.

Rangel has not yet trained alongside Michu, but he has no doubt that all three will fit in seamlessly with the style of play that has come to define Swansea's approach.

"They always start from the same style which is play the ball from the back," said the full-back, who has made almost 200 appearances for Swansea.

"You can talk about different systems but they are used to having the ball on the floor and that's obviously something that's been important for them to come here.

"They've come here because Swansea like to play the ball on the floor. We all know every manager is different - we all know that Brendan had his own style; Michael Laudrup will have his own style.

"But overall we know it's about keeping the ball and make the other teams chase the ball.

"Hopefully with the players we've got here now and with the new signings we can keep doing this."