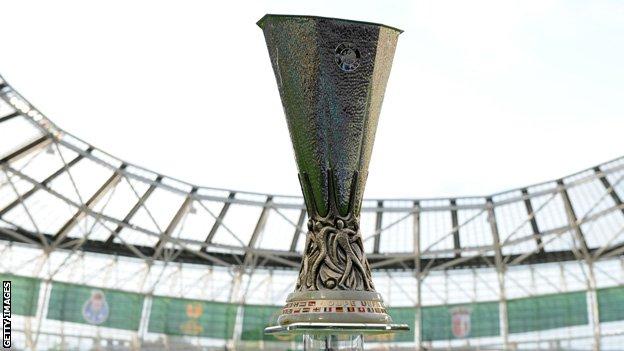 Dundee United will meet Dynamo Moscow in the third qualifying round of the Europa League.

St Johnstone will face former Champions League winners Olympique Marseille if they join United in the next stage.

The Perth side trail Eskihesirspor of Turkey 2-0 from the first leg in the second round and would play the first leg at home against Marseille.

Scottish Cup winners Hearts enter the competition at the play-off stage, the final round before the group stages.

They are a very good team. But, with a full Tannadice, we can get a victory

This will be the first time United, Uefa Cup finalists in 1987, have faced Russian opposition in a European competition.

But the Russians have lost four of their five previous matches against Scottish opposition, including a defeat by Rangers in the 1972 European Cup-Winners Cup final.

"They are a very good team. But, with a full Tannadice, we can get a victory."

Saints' potential opponents lifted the Champions League in 1993, but a corruption scandal involving their former chairman Bernard Tapie saw the club stripped of its league title from the previous season.

Marseille are now managed by Élie Baup, who previously managed Nantes and who led Bordeaux to the title in 1999, after fellow former France international Didier Deschamps was appointed national manager this month.

They qualified for Europe after winning the French League Cup, finishing a disappointing 10th in the league.

First leg matches will be played on 2 August, with return legs a week later.