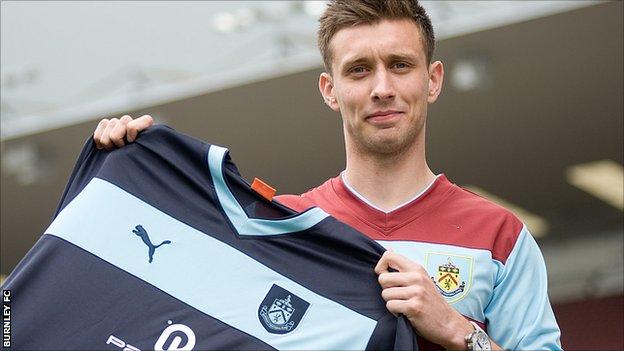 "The competition is great for the lads and I'm up for that challenge," O'Neill told BBC Radio Lancashire.

"Kieran did really well last season and good on him. I just want to work hard and try and get into the first team."

And he has been given the opportunity to play Championship football again, a year after being released by Leicester City.

"Personally, I think I can make that step up," continued O'Neill. "I played a couple of games for Leicester, I went to Mansfield to get some experience and I'm hoping to get a few games here.

"When I went down to Conference level, I was surprised how good it was. I think there are a few players in that league that can make the step up.

"This is a lot different from when I was at Mansfield, but then again I was at Leicester for seven years and the facilities there were excellent."

Another new arrival, Joseph Mills, is hoping to win promotion for a third consecutive year.

"There's nothing better than winning and getting promoted," said Mills, who has joined on a season-long loan from Reading.

"I've been fortunate in the last two years (with Southampton and Reading) to be part of teams that have achieved what they set out to do.

"I spoke to (Reading manager) Brian McDermott when I left and he said I needed to be playing games. I'm an ambitious person, I don't want to be sitting around and watching other people play.

"It's a case of coming here and getting as many games as possible and I'm looking forward to the season."

Mills could face brother Matt, who signed for Bolton Wanderers earlier this month, on the opening day of the campaign.