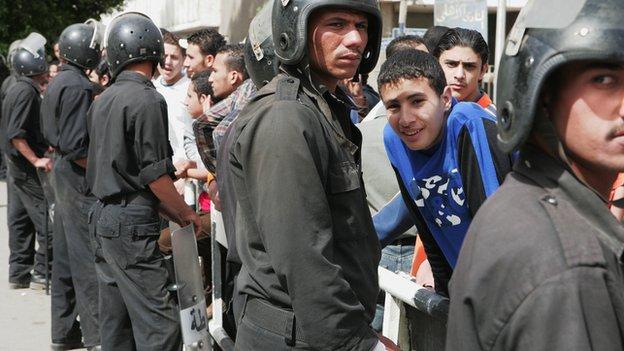 Al Ahly and Zamalek will play each other behind closed doors for the first time in a century-old rivalry when the Egyptian giants clash on Sunday.

The African Champions League tie is the latest to be staged in an empty stadium amid security concerns in Egypt.

Competitive domestic football was banned after over 70 people died at the Port Said stadium disaster in February.

This week, Egypt's government refused permission for the league to restart owing to a lack of security guarantees.

"I really wish our supporters could attend this game," Ahly coach Hossam Al Badry has said.

"My wish is that our fans will be there behind us in forthcoming matches because they motivate us. I hope this turns out to be our last game behind closed doors."

Ordinarily, an Ahly-Zamalek derby would fill the 73,000-capacity Cairo Stadium with millions more watching a live broadcast of the game in Egypt, Africa and the Middle East.

But when teams that share 11 African crowns between them take to the Military Academy Stadium pitch in Cairo on Sunday, the crowd will consist only of officials and the media.

"The security conditions in Egypt and Tunisia are difficult after the revolutions and games such as those between us and Ahly could result in problems between fans," said Zamalek coach Hassan Shehata.

Like Zamalek, Mazembe lost their first game of the group when playing away from home and are looking for their first points.

The Group A action, meanwhile, will conclude on Saturday night when Etoile du Sahel of Tunisia seek their second win in as many games against Nigerian visitors Sunshine Stars.

Title-holders Esperance kick off the weekend's Champions League action on Friday night when hosting Algerians AS Chlef in Tunis.

The group stages of the 2012 African Champions League are set to conclude on the weekend of 14-16 September.