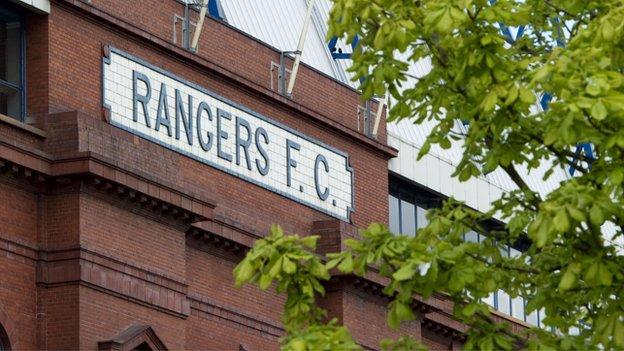 The new Rangers' participation in Scottish football next season is not certain despite accepting a 12-month transfer ban from the Scottish FA.

But it must also reach agreement with the Scottish Premier League.

The SPL, which rejected the new club's application to stay in the top flight, wants further sanctions and a share of Rangers' Division Three media rights.

Administrator Duff and Phelps, which still controls the oldco Rangers, Sevco, the Scottish Football League, the SPL and SFA must all agree the package to allow the new Rangers to play in the coming season, starting on 28 July in the Ramsdens Cup away to Brechin City.

Sevco chief executive Charles Green had argued that a transfer ban would prevent the club competing as manager Ally McCoist has lost many of his players.

And, following a week of discussions, the SFA released a statement saying that Rangers had now accepted a transfer embargo, which would begin on 1 September and end on 31 August next year.

That would mean Rangers could make signings in the current transfer window but not in January or next summer, but Malcolm Murray, chairman of the new Rangers, stressed that no agreement had yet been signed.

"The choice is stark - take sanctions or risk not playing football at all," he said.

"We do not wish to gamble with the club's future. So, under duress, we have taken the difficult decision to accept some sanctions in order to move forward.

"A delayed transfer ban would be a bitter pill to swallow and will only be agreed to if the alternative is no football.

"We also regret that the any agreement with the SFA appears not to have the support of the SPL and, as such, it still wishes to impose further sanctions on the club for the actions of previous regimes despite already voting us out of its league.

"This is truly astounding to everyone at the club who is now in charge of rebuilding Rangers from Division Three, particularly as the SPL are still trying to benefit from our media rights.

"Whilst we are deeply frustrated that the club and the new owners will have to accept some punishments for the sins of previous regimes, we are at the point where we have to move forward and get back playing football," he said.

"We will all continue to work hard over the coming days in order to begin the season and play our first match next Sunday."

However, the Sevco consortium remains unwilling to accept sanctions from the SPL should the previous regime be found guilty of making undisclosed payments through Employee Benefit Trusts and unhappy that the top-flight club still want control of Rangers' media rights.

The transfer ban and £160,000 fine had been imposed on Rangers by the SFA for bringing the game into disrepute, mainly over the club's failure to pay more than £13m in taxes last season.

Rangers administrator challenged the decision at the Court of Session and it was set aside by Lord Glennie, who referred it back to the SFA's appellate tribunal to reconsider.

However, the SFA announced that: "It has been agreed with Sevco Scotland Ltd that the registration embargo will be accepted as a primary condition of a transfer of membership.

"It is necessary to complete the judicial process following the determination by Lord Glennie in the Court of Session that required the independent appellate body to revisit available sanctions relating to oldco, having been found guilty of bringing the game into disrepute," said the SFA statement.

"Rather than convening the appellate tribunal to determine from the sanctions available to it, the company directors of Sevco Scotland Ltd have chosen to accept the 12-month registration embargo.

"Sevco Scotland Ltd have also undertaken to accept all other outstanding conditions relating to oldco's charges of bringing the game into disrepute.

"The conditional offer of transfer will now be submitted to the appellate tribunal for its consideration.

"Subject to the completion of all legal documentation, we anticipate transfer of membership next week.

"The imposition of conditions relating to transfer of membership was made on the basis that the Scottish FA, as the governing body, has an obligation to protect the integrity of the national game and to ensure that all member clubs operate within the articles of association."

The SFA announcement came on the day "The Rangers FC" were drawn at home to East Fife in the first round of the Scottish Communities League Cup.