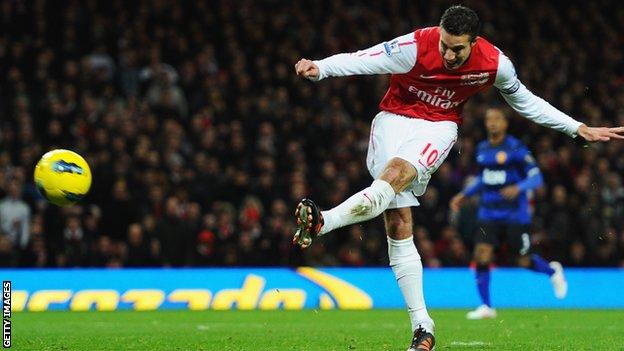 Juventus have told Robin van Persie they want to pair him with Liverpool's Luis Suarez, as they bid to lure him to Italy in the face of strong interest from Manchester United and City.

The Serie A champions have had an initial enquiry rebuffed by Arsenal, who also dismissed an opening formal bid from United out of hand on Friday.

United's bid is believed to be around £10m, £15m below Arsenal's valuation.

"For me, Van Persie is one of the best strikers in the world, if not the best, and I want to keep him at the club," Wenger told Arsenal Player.

"As for the rest I will do what is in the best interests of Arsenal Football Club. That, at the moment, is where we are. There is not a lot more to say than that."

Van Persie scored 41 goals in 53 games for club and country last season and was named Professional Footballers' Association and Football Writers' player of the year.

Arsenal had been hoping the Dutchman would sign a new deal this summer but he shocked them last month by announcing he would not extend his contract, saying he disagreed with the way the club should move forward.

Juventus sporting director Giuseppe Marotta and president Andrea Agnelli are aware the Dutchman is not, however, motivated simply by money and - as well as offering a package worth £190,000 a week - believe it is the possibility of playing alongside Suarez that could sway his thinking.

If Juventus can secure a deal for Van Persie they will turn their attentions to Suarez and intend to raise the necessary funds by selling striker Alessandro Matri to AC Milan.

Liverpool will take a dim view of Juventus's interest in Suarez and have no intention of allowing their prized Uruguayan forward to leave the club.

Suarez is under contract at Anfield until 2016 - but the Reds are keen to tie him down to an even longer deal.

The 25-year-old has scored 15 goals since joining Liverpool in January 2011, but was also banned for eight matches after being found guilty of racially abusing Manchester United defender Patrice Evra in December of that year.

Manager Brendan Rodgers has held preliminary talks with the player as negotiations continue over a new contract.

However, Juventus believe a bid of around £28m may tempt Liverpool to negotiate.

Such is the strength of Juventus's interest in Suarez that they are likely to make an offer for the 25-year-old whatever Van Persie decides to do.

Privately there is a growing confidence at Juventus that both players will move to Turin this summer.

On Friday, Manchester United manager Sir Alex Ferguson confirmed the club has made a bid for Van Persie.

"There are other clubs interested in the player," Ferguson told MUTV. "We've shown an interest and that's where we're at at the moment."

The Gunners are about to embark on a three-match tour of Asia, but Van Persie will remain in London to work on his fitness.