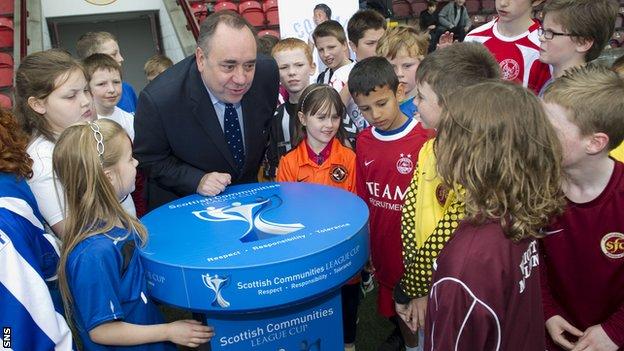 First Minister Alex Salmond has predicted a fresh new dawn for Scottish football despite the fallout from the demise of the old Rangers.

Salmond announced a 70% increase in the Scottish government's sponsorship of the Scottish Communities League Cup.

"I think you will find it is one of a range of positive announcements over the next few weeks," he said.

"These are for others to make. But I think you'll be surprised at just how positive the atmosphere is."

The Scottish Association, Scottish Premier League and Scottish Football League had agreed a restructuring of Scottish football if the SFL's 30 members clubs agreed to the new Rangers being admitted to Division One.

But the clubs rejected the proposal, saying that sporting integrity was better served by the new club, formed as the old one could not be saved from liquidation, starting in the bottom tier.

However, Salmond hinted that many of the proposals contained in a report by one of his predecessors, Henry McLeish, would still eventually come to fruition.

These "will perhaps change some of the mood music in Scottish football", he told BBC Scotland.

"It is about changing the atmosphere in Scottish football from negativity to positivity.

"We've decided to announce an increased and enhanced sponsorship of £1.7m for the Scottish Communities Cup, a substantial increase on last year's sponsorship.

"That's been done because of the success of last year, but it's also been done as a commitment to the future of Scottish football.

"But we're also adding to that a youth employment theme, which the Football Leage and Premier League clubs will be fully involved in.

"And that's what justifies our sponsorship. It is a declaration of faith in the future of Scottish football and in the power of football to do good in society."

Salmond was speaking as he helped make the draw for the tournament's first round at the ground of Second Division outfit Stenhousemuir.

"We are here because this is one of the best examples in the whole of Scotland of the way we want community football to develop," he said.

"No less than 16 different local sports clubs are based here in this stadium as a focal point and it provides a working example of the network of community sports hubs that the Scottish government want to see developed across Scotland.

"So this club represents the future in terms of how we want football to be an integral part of the development of sports facilities across Scotland.

"The government can't fund football clubs, but we can fund competitions and we can help football playing in a key role, as Stenhousemuir are here, in the sports hubs that we're trying to establish across Scotland.

"We've got 45 up and running, of which this is one. And we're looking to have 150 established by the time of the Commonwealth Games in 2014."