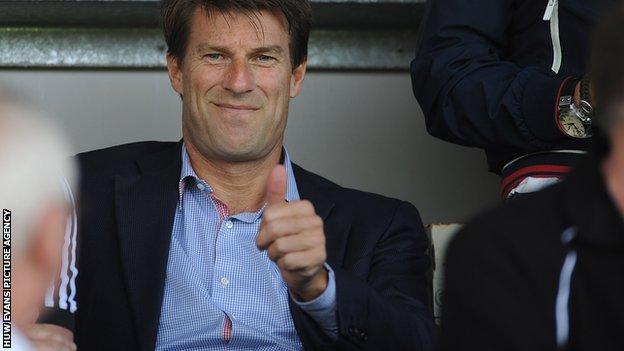 Michael Laudrup watched his Swansea City side ease to a 5-0 friendly win at Port Talbot Town in his first game since taking charge.

Stephen Dobbie, who spent the end of last season on loan at Blackpool, gave Laudrup a glimpse of his scoring prowess with a 20-minute hat-trick, which included two penalties.

Leroy Lita and Henry Jones also scored against the Welsh Premier side.

Swansea fly to United States on Sunday for their 12-day pre-season tour.

Their first game against Colorado Rapids in Denver on Tuesday will be played nine miles from the scene of Friday's shooting at Aurora, which claimed 12 lives.

New signings Chico, Jonathan de Guzman and Michu will be among the travelling party, but they were not involved on Saturday as Swansea began their preparations for the second season in the Premier League with a comfortable victory.

Laudrup took a back seat, and left the stadium after the commanding first half as assistants Alan Curtis and Kris O'Leary gave the instructions from the dugout.

Midfielder Kemy Agustien was back in action for the first time since January after ankle surgery as Swansea fielded a number of youngsters and some of last season's fringe players.

The visitors took only four minutes to open the scoring against their part-time hosts as Dobbie converted a penalty after a foul on full-back Curtis Obeng.

Lita doubled the lead a minute later when his left-foot shot on the turn beat home goalkeeper Craig Richards.

The first was another penalty after Lita was brought down, and then a delicate chip from Andrea Orlandi set up his third from close range.

A much-changed Swansea side appeared for the second half, and teenager Jones, one of the seven substitutes used, completed the scoring with the fifth from the edge of the box.