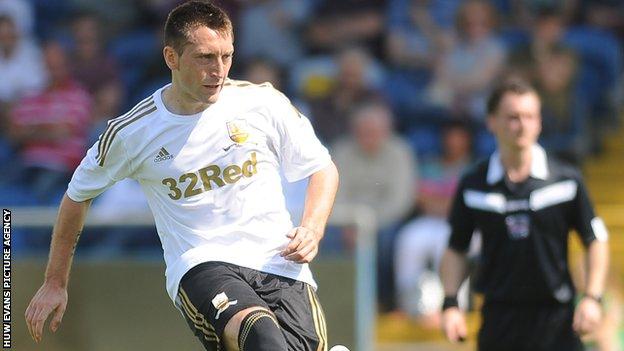 Dobbie, 29, started only two games for Rodgers last season, and was loaned out to Blackpool for the final months.

"Personally I don't think I got a fair crack last season," said the striker.

"Rodgers played a number of players in my position but I'm not one to grumble. If the team's playing well then that's fair enough and I just moved on."

Dobbie wasted no time in trying to impress Laudrup by scoring a 20-minute hat-trick on Saturday as Swansea beat Welsh Premier League side Port Talbot Town in the new manager's first game in charge.

Blackpool and Celtic have been linked with a move for Dobbie, but the former Rangers trainee, who has a year left in his contract, has his sights set firmly on the Premier League.

"Then I got isolated last season. I've come back fit, hungry and ready to show the manager I deserve a part in this team.

"He doesn't know any of the boys so it's a fresh start for everyone."

Dobbie scored six goals in eight starts on loan at Blackpool, helping the club to reach the Championship play-off final, which ended with defeat to West Ham United.

A year earlier, the Scot scored in the final as Swansea reacheded the Premier League for the first time in their history.

After starting in the first game of last season, Dobbie had to wait another four months for his second start as Rodgers preferred record-signing Danny Graham in the lone central striker role.

But Rodgers' departure to Liverpool in May has given Dobbie renewed optimism of establishing himself as Swansea's first-choice striker.

"As soon as Brendan moved on my number one objective was to come back and make sure I was ready for this pre-season, whoever came in as manager," said Dobbie, who was brought to Swansea by Roberto Martinez in 2009.

"For me it's all about showing I can play in this team and in this league because I believe in myself that I can."