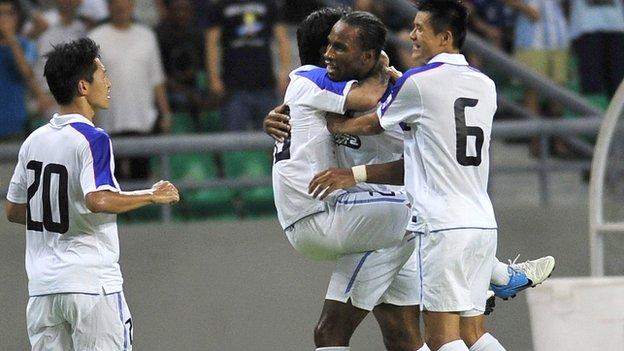 Ivorian Didier Drogba made an instant impact on his Chinese Super League debut when helping Shanghai Shenhua draw 1-1 away to Guangzhou R&F.

The former Chelsea striker started Sunday's game on the bench but came on at half-time with his team losing 1-0.

After 68 minutes, Drogba - who had almost scored with his first touch - played a fine pass to Cao Yunding, who rounded the goalkeeper to score.

The result lifts Shanghai Shenhua to 12th in the 16-team table.

Shenhua have struggled badly this season, winning just four of 17 games, but played with a increased level of confidence when Drogba entered the fray.

After 52 minutes, he headed narrowly over the bar following a cross from winger Feng Renliang.

Drogba, who won the European Champions League for Chelsea when scoring with his last kick for the club, was given a hero's welcome when he arrived in China last week to start his two-and-a-half year contract.

The 34-year-old joined Shanghai Shenhua on 20 June, a month after winning the Champions League.

On Wednesday, Drogba is set to encounter some familiar foes when his new club take on Manchester United in a pre-season warm-up for the 19-time English champions.