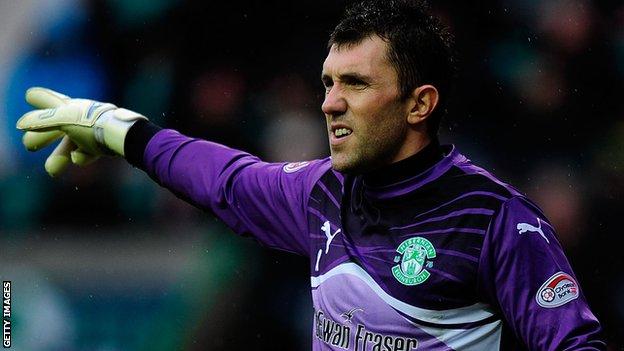 Hibernian goalkeeper Mark Brown has joined Southend on trial with a view to earning a contract at Roots Hall.

The 31-year-old made several good saves in Saturday's 2-0 friendly win over Braintree after a hectic dash south.

"It was a bit of a rush confirming flights but I flew in to Stansted on Saturday morning and came straight to the game," he told BBC Essex.

"I kept a clean sheet though and I will now have to speak with the manager and see where we go from here."

Brown began his career as a youngster with Rangers and also had spells with Motherwell, Inverness Caledonian Thistle and Celtic before joining Hibs in 2010.

He only made 12 appearances for the Edinburgh club last season but is now out of contract and, following the arrival of former Colchester keeper Ben Williams at Easter Road, is looking to secure a deal elsewhere.

Meanwhile, Southend defender Bilel Mohsni is set to travel to Germany with West Ham as part of his trial with the Premier League club.

Mohsni scored at each end as the Hammers' development squad lost 4-1 to Grays last Friday, and then came on as a substitute as the first team defeated Colchester 2-1 the following day.