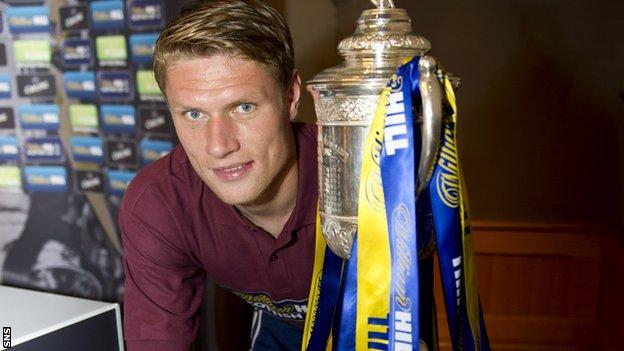 Hearts captain Marius Zaliukas believes the Scottish Premier League will be a tougher competition without Rangers.

The 28-year-old defender believes clubs will target Champions League qualification after newco Rangers were denied entry to the top-flight.

And Zaliukas now wants his own club to be challenging for honours.

"I think it is probably going to be harder now because all teams will want to achieve second place and it is going to be a hard season," said Zaliukas.

Before the start of the season our target is to get the maximum, compete with Celtic and do well in both cups

Zaliukas, who was making the draw for the first round of the Scottish Cup, said Rangers would be missed.

"It was a good club, a brilliant stadium and great atmosphere to go there," he said.

"Obviously fighting for honours is our target, but it depends how we negotiate the season.

"Before the start of the season, our target is to get the maximum, compete with Celtic and do well in both cups."

Despite holding the memories of last year's success close to him, Lithuania defender Zaliukas wants to collect the trophy again next May.

"Every time anyone can touch it, they should do it. We want to do well again this year and have the trophy again," he said.

"Last year's win is in the past already, but it has taken a place inside our hearts for the rest of our lives.

"Now it is time to start again and try and achieve this again."

Hearts go into the upcoming season with new manager John McGlynn at the helm, but the former Raith Rovers boss has not had the funds to sign any players and is working with some of the club's highly rated young talent.

Zaliukas believes this is a positive step and is happy with the preparations ahead of the new campaign.

"Pre-season is going quite well," he said. "The training is good and all the youngsters are performing well and putting pressure on us older ones to work harder.

"I think everyone is enjoying working under the new manager, all the training is good and we are ready to go."