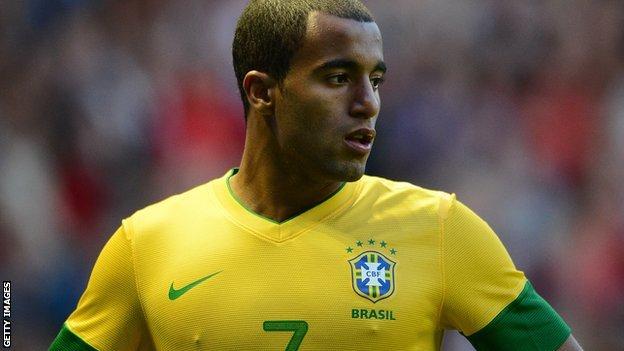 Ferguson is keen to sign Sao Paulo midfielder Lucas, 19, but the United manager denied a deal, reported to be £26m, has been agreed.

Who is Lucas Moura?

International career: 15 senior caps for Brazil including appearances for his country at the 2011 Copa America

"We haven't reached an agreement for the player. We've shown an interest but until such time as we get a deal agreed we can't say he's our player."

Lucas is in Brazil's Olympic squad and has attracted interest from other Premier League clubs, including Chelsea, as well as Real Madrid and Inter Milan.

"At this moment we're looking at other options in terms of bringing other players in," Ferguson added at a news conference on Monday in Shanghai, China, where United are on tour ahead of the 2012-13 season.

"We're not lying on our backsides doing nothing. We're trying hard to bring other players to the club."

Meanwhile, Ferguson has revealed Nemanja Vidic and Jonny Evans, 24, could both miss United's opening game of the season against Everton on 18 August.

Vidic, 30, is back in full training after knee ligament damage and there were hopes the captain would be able to feature at Goodison Park.

But Ferguson has urged caution and says Evans, who has had surgery on a foot injury which ruled him out of the end of last season, could also miss the beginning of the new campaign.

"If I can keep Rio Ferdinand fit, then Vidic and Jones should give us ample cover."