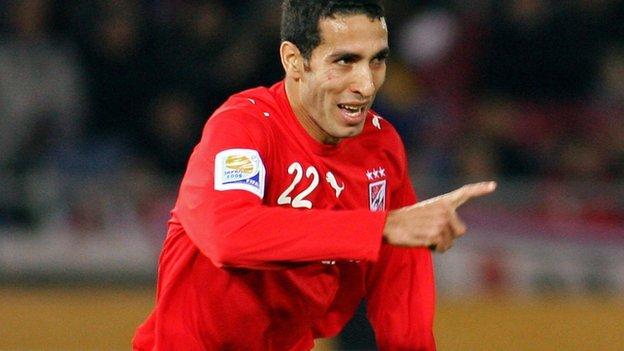 Al Ahly leapfrogged Ghana's Berekum Chelsea at the top of Group B of the African Champions League when beating fellow Egyptians Zamalek 1-0 on Sunday.

Playmaker Mohamed Aboutrika settled a tame derby when heading the only goal of the match after 79 minutes.

The game was played without fans for the first time in the teams' 101-year rivalry because of security concerns.

"Football behind closed doors is like a wedding without any guests," said Al Ahly board member Khaled Mortagey.

GROUP B (after two rounds)

"The atmosphere is not good and the situation is not good for the players, the board or for anybody."

Mortagey also conceded that the fact that one of the world's most heated derbies was played in a largely-empty stadium had contributed to a poor match.

"I guess it did have an impact but all that is happening in Egypt is affecting the performances of the players," he told BBC Sport.

"We are not living in a natural sports atmosphere, so I think everything is affecting the performance but thank God we win and the most important thing is that we have six points."

Al Ahly's second win in as many games takes them top of Group B.

Meanwhile, Zamalek's campaign has been plunged into disarray following a second defeat in as many games with the White Knights now trailing their rivals by six points after just two rounds of matches.

Worse still, it is now 13 games since Zamalek last beat Al Ahly, with their last win coming back in 2007.

Sunday's evening game was played at the Cairo Military Stadium with no fans in attendance and the lack of atmosphere, coupled with the shortage of match action for both teams, contributed to a lacklustre game.

There has been no league football in Egypt since February, when a stadium disaster in Port Said prompted the government to suspend all domestic football.

The win leaves Al Ahly on six points, two more than Ghanaians Berekum, while 2010 champions TP Mazembe are struggling with one point and pointless Zamalek need a dramatic turn-around in form.

Aboutrika, a former BBC Footballer of the Year, signed off in perfect style ahead of leaving Egypt to join up with the North Africans' Olympic side.

He is one of three over-age players in Hany Ramzy's squad, with Emad Moteab and Ahmed Fathi joining him at this month's Games in London.

Egypt kick off their Group C campaign on Thursday when taking on Brazil in Cardiff, while the other teams in the group - Belarus and New Zealand - clash in Coventry.

Aboutrika may be unavailable for the third round of Champions League group action since Al Ahly host Berekum Chelsea on 03-05 August, a weekend when the Olympic Games quarter-finals will also be taking place.

The other Group B fixture sees Zamalek travel to Mazembe, with Group A leaders Esperance hosting Etoile du Sahel in a Tunis derby while AS Chlef travel to Sunshine Stars in the weekend's other game.