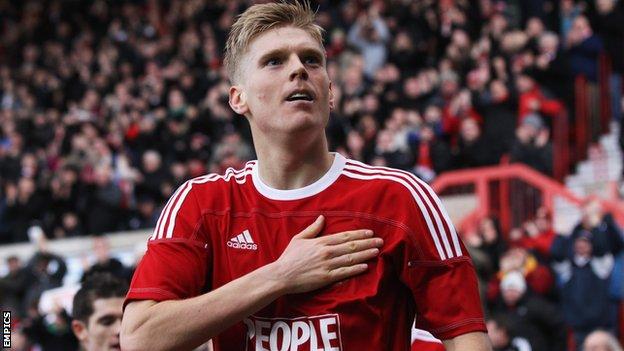 Ex-Swindon striker Alan Connell admits he was surprised by the club's decision to release him from his contract.

Connell, who has since joined Bradford, was deemed surplus to requirements at the County Ground despite finishing top scorer with 14 goals last season.

"I received a phone call out of the blue, the day after the manager signed a new contract," the 29-year-old told BBC Wiltshire.

"They said I didn't figure in their plans and that was how it was left."

He continued: "From that moment on, the chairman and an agent they use were in contact with my agent to try and ease my exit to another club.

"I found myself in an awkward situation where I was very happy at the club but as the weeks went by it became apparent that my future was elsewhere."

Connell started his career at Bournemouth before spells with Torquay, Hereford and Brentford.

But it was his stint with Grimsby in the Blue Square Bet Premier, where he scored 25 goals in 46 games, that caught the eye of teams higher up the league.

Manager Paolo Di Canio paid a six-figure sum to sign Connell in July 2011, but the forward failed to secure a regular place in the starting XI, with 21 of his 44 appearances coming off the bench.

And following Swindon's promotion to League One, Connell was placed on the transfer list.

He attracted interest from several clubs, including York, Scunthorpe and Stevenage, but opted to join the Bantams on a two-year deal.

"Bradford were there from the outset," said Connell.

"It got more and more serious a week and a half ago and they are the ones who were really keen to do something.

"Ideally, I would have liked a good go at League One this year but I had to think of myself and my career, and I've decided Bradford is the right club for me.

"I'm looking forward to it but I leave Swindon with a heavy heart. It was a great year and I met so many great people.

"I'll take some happy and special memories away with me."