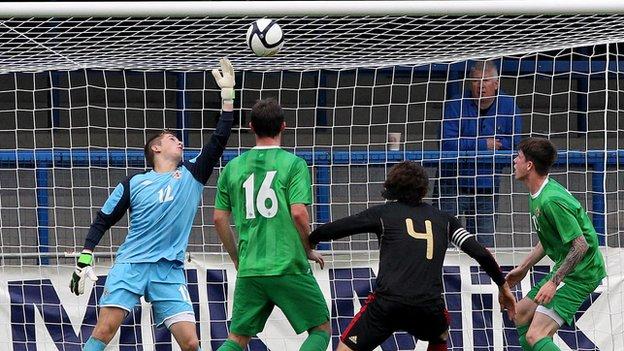 Northern Ireland have missed out on the Elite Section final at the Milk Cup after a scoreless draw with Mexico at Coleraine on Monday night.

The hosts were beaten 5-3 by Chile in their opener and now face a fifth-sixth play-off against Turkey, who lost 1-0 to the USA.

Thursday's final is between Mexico and Denmark, who defeated Chile 2-1.

There were wins for Manchester United and Liverpool but Spurs were hammered 7-1 by South Coast Strikers.

United bounced back from their opening 2-0 defeat by Co Tyrone by crushing Revo Express 8-0 in the Premier Section in Ballymoney.

Newcastle United also have a perfect record thanks to a 6-0 rout of Pachuca.

Liverpool made it two wins from two Junior Section games with a 3-0 victory over Union Temuco in Portstewart.

Everton were Monday's top scorers among the juniors as the Merseyside teenagers beat Cruz Azul 6-0.

Mexico twice came close twice in the first half against the hosts at the Coleraine Showgrounds.

Deane then tipped over from an Antoni Briseno header.

Northern Ireland improved after the break but failed to threaten until the final minutes, when Shay McCartan had a chance but hesitated and the ball was cleared.

Ipswich Town 1-3 Queen of the South