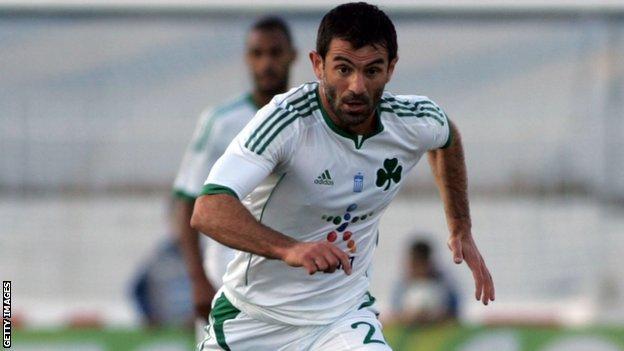 Rangers have suffered a financial meltdown that has led to the creation of a new club reborn in Division Three and barred from Europe for three seasons.

Last season's runners-up have been replaced in the Champions League by Motherwell.

It will be a disaster for Celtic if they don't win

And the side who finished third will be rank outsiders when they make their debut in European football's premier club competition against Panathinaikos.

The Greeks are seasoned Champions League performers, having won their domestic title 20 times and finishing runners-up last season to Olympiakos.

Motherwell were never going to get an easy tie, having been drawn in a section with clubs that missed out on the title in other major leagues, with Vaslui from Romania the other lesser light among heavyweights Fenerbahce, Copenhagen, Club Brugge, Dynamo Kiev and Feyenoord.

They also go into the tie with manager Stuart McCall having lost some of his most experienced players following budget cuts resulting from the uncertainty over Scottish Premier League finances triggered by Rangers' demise.

That his only likely addition might be present trialist Simon Ramsden, who was released by English League Two outfit Bradford City in the summer, only serves to undermine his side's chances of progress.

Barring an upset, it is likely that it will be left to champions Celtic to carry the Scottish flag.

Instead, they are likely to face HJK Helsinki, who are almost certainly through after a 7-0 win in the first leg against KR Reykjavic.

The Finns have stumbled at the third qualifying round stage in the last two seasons, last year losing to Dinamo Zagreb after a similarly emphatic 13-0 aggregate hammering of Welsh outfit Bangor City.

However, HJK insist they remain a banana skin and will take heart from some unimpressive results in pre-season by a Celtic squad yet to be strengthened this summer, the latest slip-up being a 4-0 defeat by Ajax.

"It is also worth remembering that the domestic season has not yet started in Scotland and that will probably be a small advantage for us," said coach Anti Muurinen.

Assistant Juho Rantala thinks his side can benefit from being "huge underdogs".

"We want to win - they have to win," he said. "Of course there is pressure on us, but not like Celtic.

"It will be a disaster for Celtic if they don't win.

"The Champions League is huge for them, so they will be anxious.

"Some of their best players earn nearly as much in a week as some of our players get basic in a year, but it's lucky that it's not all about the money.

"It might be a good thing they haven't started their season yet.

"We have played 17 games and are in the middle of our league season."

However, HJK do not appear to have the quality of player they had 12 years ago, when it took an extra-time Chris Sutton goal for Celtic to progress in the Uefa Cup first round 3-2 on aggregate, and the Finns have failed to reach the group stages of the Champions League since 1998.

By the time they meet again, Scottish representation in the third qualifying round of the Europa League could have been reduced from three to two.

St Johnstone need to produce one of their finest European displays to overcome a 2-0 deficit against Turkish outfit Eskisehirspor in the second leg in Perth and set up an even more difficult tie against Olympique Marseille.

Dundee United are already in the third round but have been drawn against big-spending Dynamo Moscow, which leaves the two Tayside outfits with an uphill task to join Scottish Cup winners Hearts in the next stage.

British connections: Juho Makela is in fourth spell with HJK after signing in April from Sydney but was previously with Hearts; Sebastian Sorsa, 28, Finland midfielder, made three appearances for Hamilton in 2009 after leaving Leeds United; teenage striker Joel Pohjanpalo had a trial with Liverpool.

British connections: Welsh defender Rhys Weston has played for Arsenal, Cardiff, Port Vale and Walsall and was last with Dundee. Iceland striker Kjartan Henry Finnbogason joined Celtic from KR and had a loan spell with Falkirk. Iceland midfielder Bjarni Guðjonsson had spells with Newcastle, Stoke, Coventry and Plymouth. Englishman Gary Martin, their new signing from Icelandic rivals Akranes, was previously with Middlesbrough. KR have been making attempts to sign former Rangers youth and Scotland Under-21 striker Steven Lennon from Fram.