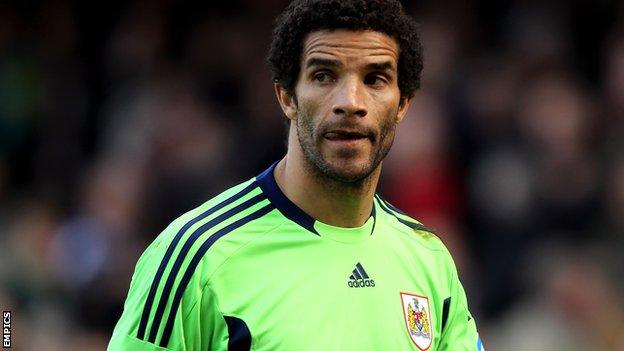 The 41-year-old has been without a club since being released by Bristol City in May and worked as a television pundit for the BBC during Euro 2012.

"David contacted us last week and asked if he could come and train and we were more than happy to help," Exeter manager Paul Tisdale told BBC Sport.

"If he comes in with appropriate focus and attitude, which of course he has done, it can't harm at all and it's good for them to see the levels that he can attain on the pitch.

"I think it's a positive environment where someone can step in and make him feel at home and at the same time he can get something from it," Tisdale added.

However, it is unlikely that Exeter will make a move for the former Aston Villa, Liverpool and Portsmouth goalkeeper.

But Tisdale says James, whose first senior manager was Exeter's director of football Steve Perryman when he was in charge at Watford, could have a great influence on his side.

"It can only help and it can only add some interest to the squad and the goalkeepers when they're training.

"I would hesitate to suggest that there's anything else in it from his part, or our part, but we're more than happy to help.

"I'm sure he won't mind me saying he's not played for a couple of months and he needs to train to get that sharpness back and I'm sure a couple of sessions a week with us and he'll start picking it up again."