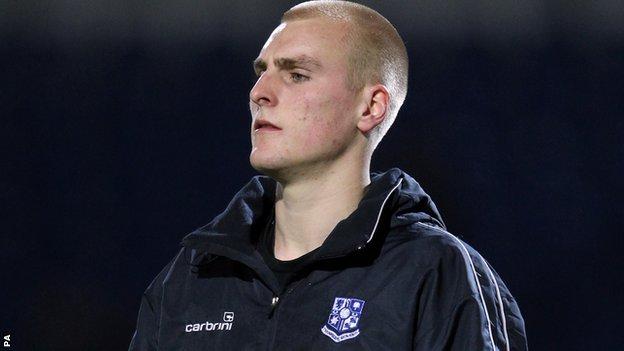 Andy Morrell says new Wrexham signing Andy Coughlin will have to work hard if he is to dislodge regular keeper Joslein Mayebi.

Coughlin has signed a one-year deal following his release by Tranmere Rovers.

"It's now up to him to knuckle down and train hard and try and wrestle that number one shirt off Josi," Morrell said.

"Obviously Josi's our number one. He took the shirt off Maxi [Maxwell] and kept it. He's come back the same this year and Andy knows it's going to be a tough battle.

"I've given Andy the reassurance that if he's doing well and Josi's not doing great then he will go in and play.

"He's [Coughlin] got to push now and be better than Josi every day in training to prove that."

Liverpool-born Coughlin made two appearances during his time at Tranmere Rovers but was released by the League One club at the end of last season.

The 19-year-old impressed while training with Wrexham and player-manager Morrell is delighted to have signed the goalkeeper.

"He's a big lad, he's got great feet. I think he's come on in the two and-a-half weeks he's been here and I'm pleased to get him down."

Wrexham have won their three pre-season games so far, including a 3-1 win over Scottish Premier League side Kilmarnock.

But Morrell said performances, not results, were important as the Dragons prepare for their Blue Square Bet Premier opener against Woking on 11 August.

"Obviously it's nice to win but as I've said before I've been beaten in every game in pre-season and we've gone on to do well in the season. I'd take it all with a pinch of salt," he said.

"It's all about the lads getting minutes under their belts and ready for that first game and putting their stamp on a team to say 'pick me' for the first game."