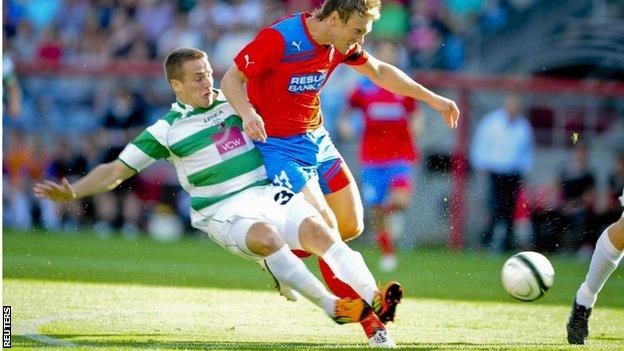 Welsh champions The New Saints failed to progress past the second qualifying round of the Champions League after losing to Helsingborg of Sweden.

A goalless first leg had given TNS hope against the Swedish champions, but two early goals proved their undoing.

Walid Atta settled any potential Helsingborg nerves when he headed in an eighth-minute corner.

TNS responded well after falling behind, enjoying their best spell of the match as Greg Draper failed to capitalise on Alex Darlington's through ball and then shot inches wide from a Craig Jones weaved his way through the home defence.

But Helsingborg took firm control of the tie when Sørum scored from close range, and Alvaro's 89-minute effort completed the victory.

TNS manager Craig Harrison said: "We did a fantastic job to still be in the tie by keeping a clean sheet in the first leg.

"We knew it was going to be tough in the second leg but we weren't good enough in the first half an hour of the game.

"We knew they were going come out firing because I think they had a point to prove because they've had a lot of bad press in Sweden about how bad their result was in the first leg.

"But we didn't defend well. It would have been interesting if it had been 0-0 after 30 minutes."

The Saints can now concentrate on the defence of their league title, which begins at home to Airbus on 17 August.