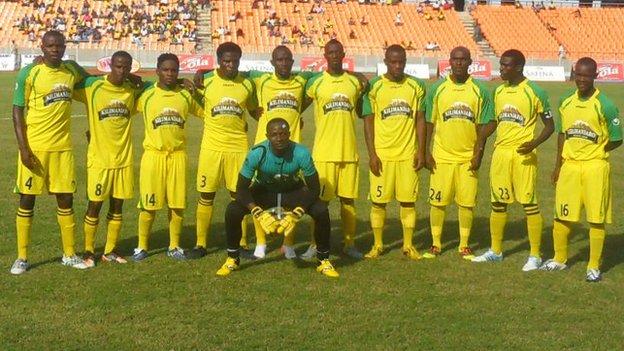 John Bocco hit a hat-trick in the 3-1 win and the Tanzanian side will now meet Vita Club from DR Congo, who beat Atletico of Burundi 2-1.

Following the elimination of Simba both semi-finals will be played on Thursday instead of Wednesday.

Champions Yanga FC of Tanzania will play Rwanda's APR in the other match.

Azam's English coach Stuart Hall praised his team for their performance, saying: "I had said that we had not performed to our best but today it was a fantastic performance.

"We missed some chances and we were denied a clear penalty, but when you are playing Simba or Yanga that's how referees work, but in the end we got the result we wanted and now we are in the semi-finals."

Bocco, who is nicknamed Debayor and a Tanzania international, scored in the 17th, 46th and 73rd minutes for Azam. Shomari Kapombe gave Simba brief hope with a goal in the 53rd minute.

The result is a huge achievement for Azam whowere founded only in 2007 by millionaire Salim Bakhresa.

In Tuesday's other quarter-final Vita Club took the lead through Taddy Etekiama in the seventh minute but were pegged back by Pierre Kwizera's equaliser for Atletico. They secured victory with a stoppage-time strike from Basilua Makola.

Meanwhile, Yanga edged through to the last four on Monday, coming from from behind in Dar es Salaam and finally overcoming Mafunzo of Zanzibar on penalties.

The game had ended 1-1 after 90 minutes, whereupon it went straight to penalties - which Yanga won 5-4.

APR's Dutch coach Ernest Brandt said he was determined to gain revenge against Yanga, after their 2-0 defeat in the group stages.

"Of course we will be seeking revenge against them, but we will also be looking to win it here, because we have never won the cup outside Rwanda," he said.

Yanga's passage to Wednesday's semi-finals was hard-fought after Mafunzo scored an early goal when Ali Mmanga rose to head off a corner.

The Zanzibaris led until half-time but two minutes after the resumption, Yanga pressed forward and levelled when Said Bahanuzi powered home a header.

Rwandan army side APR, meanwhile, scored their goals in the first half through creative midfielder Jean Claude Iranzi and Burundi international Seleman Ndikumana - with APR pulling one back in the second half through Robert Ssentongo.