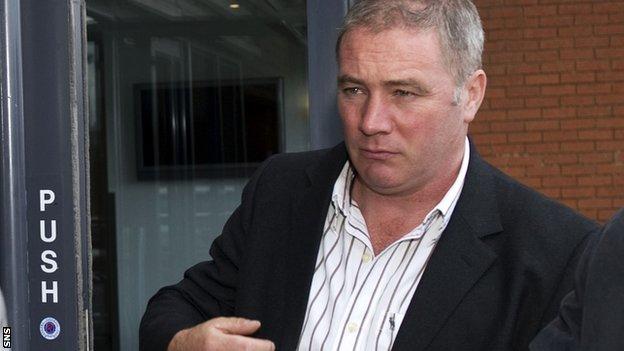 Kelty Hearts have criticised the Scottish FA after the Fife juniors were forced to postpone a pre-season friendly against the new Rangers.

The Ibrox outfit were unable to play because the SFA has yet to approve the club's membership.

"So a thanks must go to the SFA for having a negative impact on not only the top end of Scottish football but the lower end also," said Kelty.

The testimonial game for an experienced Kely midfielder will be re-arranged.

Ally McCoist's side have only played games behind closed doors at their Murray Park training ground as they are not licensed to play official fixtures.

They are due to play their first game of the season, against Brechin City in the Ramsdens Cup, on Saturday.

But they are still in negotiations with the SFA, Scottish Premier League and Scottish Football League about the conditions for membership after they were denied a place in the top flight and placed in Division Three.

"The Stefan Winiarski testimonial match between Kelty Hearts and Rangers on Wednesday has been postponed to a later date due to the SFA not granting Rangers a licence to play any matches, friendlies or competitive," said the East Superleague club on their website.

"Rangers have instructed us that an alternative date will be arranged very soon so all tickets and hospitality tickets are still valid for the match.

"We are all gutted with all the work done sending tickets out etc, money spent and time put in by volunteers to make the night a great one.

"As you can imagine, Stefan is also sick at this outcome.

"Programmes have been printed, food ordered, marquee for hospitality etc."

Rangers fans have already bought the entire away allocation for their match against Brechin at Glebe Park as the club's Sevco owners announced that they are charging up to 50% less for season tickets in the Third Division.

While the prices have been announced, they will not sell season tickets until they secure SFA membership.

"We hope to provide further details on the timing of season ticket renewal distribution and payment methods later in the week once the position becomes clearer," they announced.