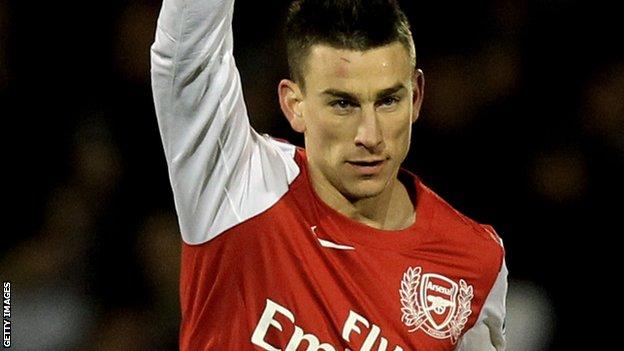 Koscielny's decision to commit comes after striker Robin van Persie said he would not be signing a new contract.

6 - goals for the Gunners

6 - his squad number at The Emirates

Van Persie's Arsenal deal expires next summer and the Netherlands international is seeking a fresh challenge after eight years at the club.

Wenger wants the player's future sorted before the start of the Premier League season on 18 August, with Manchester United, Manchester City and Juventus all having offers rejected for Van Persie.

At least Wenger will be relieved that Koscielny has committed to the Gunners, although Arsenal have not revealed the length of his new contract.

"I'm delighted to have reached agreement with the club," said Koscielny.

"I have had a fantastic time here and look forward to an exciting future with Arsenal."

No other player has started more games for Arsenal over the last two years than Koscielny, who has made 85 appearances in all competitions since joining in July 2010.

Koscielny has made remarkable progress since playing for Tours in Ligue 2 in France three years ago.

"Laurent has been outstanding for us over the last two seasons," added Wenger.

"I am very pleased he has decided to commit his future to the club.

"When you consider that until 2009 he was playing in Ligue 2 in France and that he is now performing at the very top level in the Premier League and for his country, the development that he has shown has been absolutely exceptional."