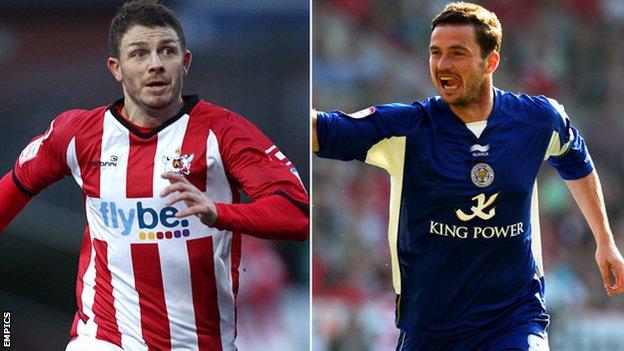 The duo have been part of the Grecians' pre-season programme and both had spells at Exeter last season.

Oakley, 34, left Leicester in May and played seven times on loan at Exeter before suffering a thigh injury.

Striker Cureton, 36, spent part of the second half of last season on loan at St James Park and was released by Leyton Orient this summer.

The former Bristol Rovers and Reading striker was top scorer for City in the one-season spell he had at the club in 2010-11.

"If I can get that one established pretty quickly I'll be more than happy," Exeter boss Paul Tisdale told BBC Sport of signing Cureton.

"Jamie suits us down here, we suit him, if he'd like to sign then we'd find a space for him."

Oakley has featured in friendlies with FC United of Manchester and Dorchester Town as he tries to recover from injury.

He has not played a first team game since his last appearance for Exeter in a 0-0 draw with Carlisle at St James Park last November.

"I've been more than happy to facilitate his return from injury, he didn't play many games last year," Tisdale said.

"He played half a dozen for us and that was about it, so if Matt would like to join us then there'll be a place for him."