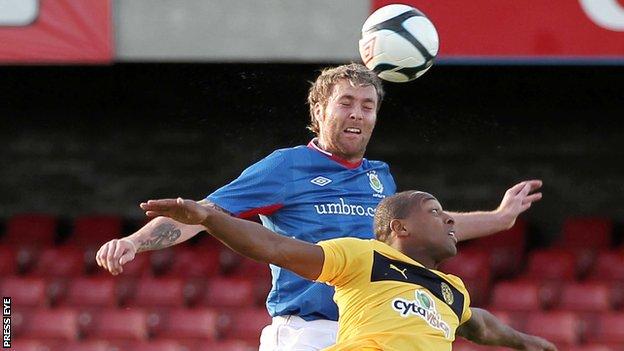 Linfield exited from the Champions League after a creditable goalless draw against AEL Limassol in the second qualifer round second leg game.

Rui Miguel missed an early chance for the Cypriot club but Ryan Henderson then forced a great save from keeper Matias Degra with a header.

Peter Thompson and Daryl Fordyce also tested the Argentine goalkeeper in the second half at Windsor Park.

Limassol's 3-0 aggregate victory sets up a clash with Partizan Belgrade.

The start was delayed for around five minutes because the referee was unhappy with the pitch markings which necessitated some late running repairs from the groundstaff.

A Limassol side packed with talented players from Brazil, Argentina and Portugal showed show lovely touches early on as Linfield struggled to win possession.

Portuguese player Miguel should have put the visitors ahead in the 14th minute as he only had Alan Blayney to beat after a sweeping move but he fired wide.

However, Linfield began to impose themselves on the contest and a delightful bit of skill by Jamie Mulgrew set up Henderson's 21st-minute headed effort.

Mulgrew's stepover completely outfoxed the Limassol defence and Henderson powerfully connected with Stephen Douglas' cross which forced Degra to make a full-length tip over the crossbar.

Brazilian Edmar tested Blayney with a fierce drive after the restart but Linfield continued to battle and Thompson failed to get full purchase on a chance in the 68th minute.

However, Linfield almost grabbed a winner in injury-time as substitute Fordyce forced another good save from Degra.