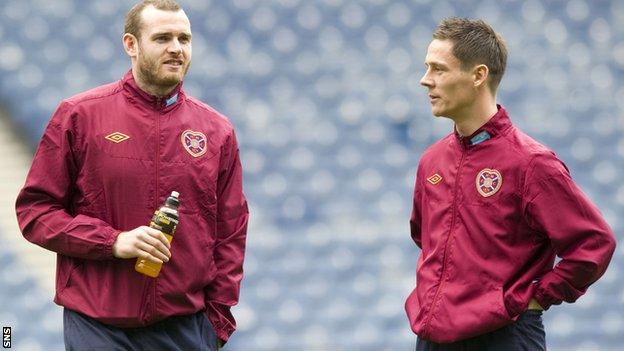 Former Hearts duo Ian Black and Craig Beattie are training with the new Rangers, the club have confirmed.

Charles Green's Sevco parent company is currently negotiating for the Scottish FA membership required to play Brechin in the Ramsdens Cup on Saturday.

But the chief executive praised Ally McCoist for lining up such signings.

"I think it's testimony to the manager. Rangers is a name, but it's also the manager that the players want to come and play for," said Green.

"I think people within Rangers have seen first-hand what Ally has had to do since February.

"But the reality is the players who are looking to join the club have seen it from the outside and I think that's recognition of what Ally has done to keep the club together."

Black was not offered a new contract by cost-cutting Hearts after May's Scottish Cup final win over Hibernian and agreed to join Rangers in early July.

It appeared at the time that it was dependent on Rangers playing in Division One, but the 27-year-old seems undeterred by the new club being forced to start life in the Third Division.

The 28-year-old Beattie spent the last few months of last season at Tynecastle after being released by Swansea City but rejected an offer to stay on with reduced terms.

Green also expects Northern Ireland striker Andy Little, who was out of contract with Rangers at the end of the season, to sign for the new club.

"Alastair has a list of players and he has been speaking to some of them," said Green.

"Obviously, until we have SFA membership, he can't sign any of them.

"He has two or three he wants to bring in this week and start training with the squad.

"We have a number of other targets lined up and it's up to Ally to decide.

"He picks the ones on the field and I pick the ones in the office.

"The difficulty we have is that we are playing in the Third Division.

"For Alastair now, the balance is getting the players in that can play in the Third Division but can also move forward as the club moves forward."

Black spent his youth career at Blackburn Rovers, joined Inverness in 2004 and spent five seasons with the Highland club before moving to Hearts.

The midfielder is recovering from a hernia operation and spent time working with physio Stevie Walker at Murray Park.

Beattie made 50 appearances for Celtic before joining West Brom in 2007 and spent two years out on loan to Preston, Crystal Palace and Sheffield United before a move to Swansea.

The striker, who also had a loan spell at Watford, featured in nine matches for Hearts towards the end of last season as part of a short-term deal, inculding a substitute appearance in the Scottish Cup final.