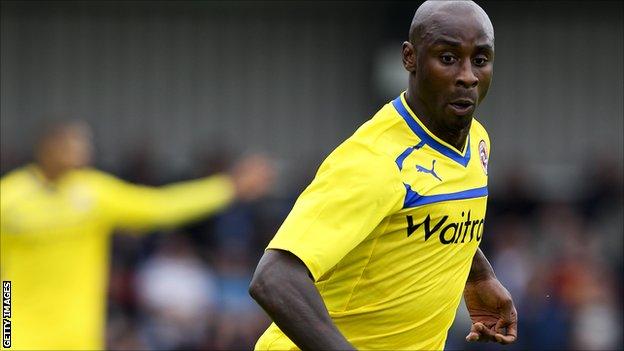 Reading striker Jason Roberts says it is imperative the Premier League newcomers make a quick start to the new campaign if they are to avoid the drop.

The Royals are back in England's top-flight having won the Championship last season and Premier League veteran Roberts knows how hard it will be.

"Being a newly-promoted side we'll have to go out all guns blazing and start well," Roberts told BBC Berkshire.

"It is an unforgiving league and if you don't start well it can be a problem."

Roberts, 34, will miss the first two of Reading's games through suspension but says he has been impressed with the club's new acquisitions over the summer.

And Roberts says he is confident the Royals can make their mark in the Premier League this season.

"The boys have come back fit and focussed and I think that will help our cause," he said.

"If you look at the squad now I don't think anyone is short of what they should be and that is a good place to be.

"They have integrated into the squad straight away and that's great."

One of those new signings is former Watford defender Adrian Mariappa.

Mariappa, 25, previously played in the Premier League with the Hornets but says he cannot wait to experience it all again.

"I'm really enjoying settling in and getting to know everyone," said Mariappa.

"I'm just trying to train well and get into the team. I've come here to play Premier League football, it's the best league in the world and I've just got to work hard to get in that team now."

Mariappa added: "I played Premier League football with Watford and it is something I've been wanting to do again, so I've been trying to improve and I feel I'm ready to give it another go.

"Playing against some of the best players in the world is going to be great and I am just trying to take it all in. There is not a particular team or player I'm just looking forward to, it is just the whole experience I'm excited about."