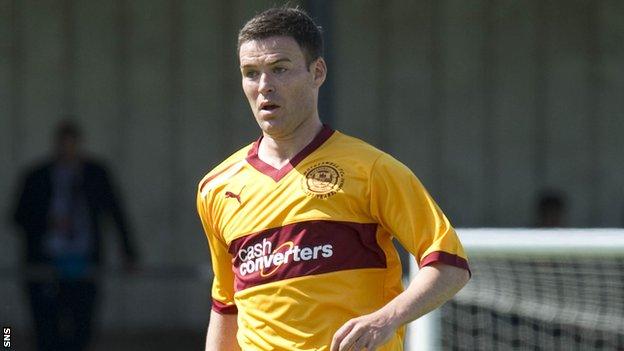 Former Bradford City defender Simon Ramsden has won a 12-month contract with Motherwell after a trial.

Ramsden had turned down a new contract with League Two outfit Bradford and the 30-year-old is likely to make his debut in a Champions League qualifier.

I am really looking forward to the challenge ahead

Motherwell are struggling for defensive cover because of injuries ahead of the first leg against Panathinaikos.

But centre-half Shaun Hutchinson could make a timely return to action against Hamilton Academical.

Hutchinson has been sidelined with a groin problem but could play in a pre-season friendly at New Douglas Park.

Stephen Craigan retired and Tim Clancy joined Hibernian in the summer, while both Jonathan Page and Steven Saunders have been ruled out of next week's visit by the Greeks.

And manager Stuart McCall could utilise Ramsden in central defence despite the Englishman being better known at his former club as a right-back.

A delighted Ramsden, who had been on trial for three weeks, told the Steelmen's website: "It seems as if I have been here for a while already.

"I went to Portugal with all the lads at the start of the month and that was really good in terms of getting to know everyone as you're spending 24-hours a day with them all.

"Everyone is making me feel very welcome and it's nice to get everything sorted. I am really looking forward to the challenge ahead."

Bishop Auckland-born, Ramsden began his professional career with Sunderland before spells at Grimsby Town, Rochdale and three years at Bradford, where he worked under McCall.

The Well manager revealed that striker Bob McHugh could also be on his way back from injury.

"Hopefully, Shaun Hutchinson and Bob McHugh will get a part of the game," McCall added ahead of the friendly against their local rivals.

"They both came through training today unscathed so we'll be looking for them to kick on."