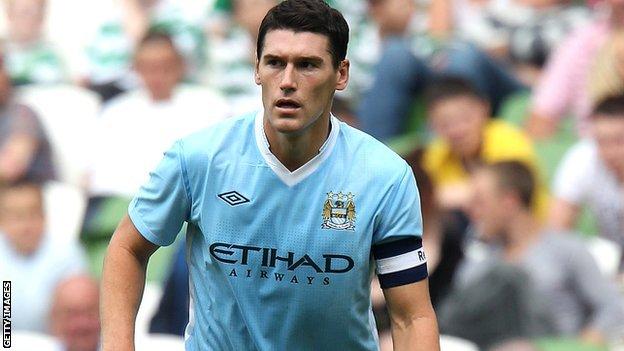 Manchester City midfielder Gareth Barry says he could be fit for the start of the new Premier League season.

Barry, 31, missed England's Euro 2012 campaign with a hip injury and then had a hernia operation in Munich a fortnight ago.

However, Barry - a regular as City won the League last season - hopes to play when they start their title defence against Southampton on 19 August.

"The scars have healed really well, but we'll see how I feel when I start playing again. Fingers crossed it will all have healed up."

The left-footed central midfielder joined City for £12m in June 2009 after making over 400 appearances for Aston Villa.

Barry captained his country when England drew with Ghana at Wembley in March 2011, but was forced out of Roy Hodgson's squad for this summer's tournament in Poland and Ukraine.

The player has had to miss his first pre-season in 16 years as a professional, but pledged to return to action as soon as possible as City seek back-to-back Premier League titles.

"There will be a two week healing process and I've started my rehab to try and get fit and catch up with the rest of the lads," he said.

"I don't really want to put a timescale on it, but hopefully I'll be ready for the main games starting.

"To head into the new season as champions gives you a great deal of confidence and myself and the lads are looking forward to trying to regain the title."