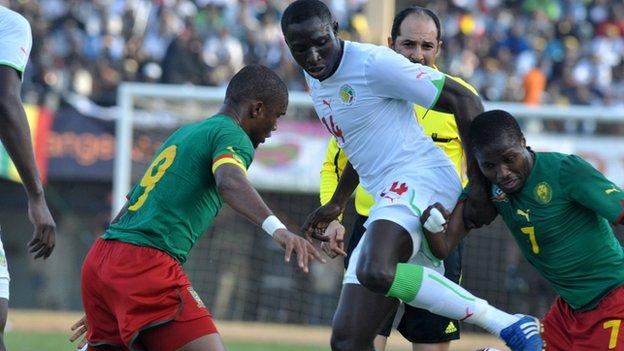 Senegal believe they can get their Olympic debut off to a flying start when they face Team GB at Old Trafford on Thursday.

And midfielder Mohamed Diame thinks Senegal can surprise the hosts.

"It's good for us to start against them because it will take time for the British players to get to know each other properly," he told BBC Sport.

"If we can start well then we have a great chance to go to the quarter-finals."

However, Diame, who has just signed for English Premier League side West Ham, does not expect it to be easy.

"Even though Team GB lost against Brazil it was a very good game for them," said the former Wigan player. "It is a new team and now they know what they need to do to prepare for the first match of the Olympics.

"I'm sure they learned a lot playing against a big team like Brazil and we know they will be very dangerous in front of the home fans."

Diame is one of three overage players selected by coach Abdoukarime Diouf after his side battled through a play-off against Oman to book their place at the Olympics.

The 25-year-old admitted he is grateful to West Ham for allowing him the opportunity to line up for his country - and he has vowed to make it a tournament to remember.

He said: "I have to say thank you to West Ham for giving me the chance to play in the Olympics. They could easily have said 'no' but they know it means a lot to me.

"We have been preparing well for the tournament so I think we are ready to put in a good performance."

The Teranga Lions haven't had the smoothest build-up to the tournament, with star striker Dame Ndoye unavailable after his Danish club FC Copenhagen refused to give him permission to play. Kalidou Coulibaly Yero has been called up as a replacement.

And defender Victor Bindia is a major injury doubt ahead of Thursday's opener.

But Abdoulaye Ba, who last year played for Portuguese side Academica de Coimbra on loan from Porto, expects his side to be up to the challenge after spending two weeks in a training camp.

"We haven't come here just to be on holiday and we are determined to do well for our country," he said.

"It's the first time we have made it this far at the Olympics but there is a lot of ability in this group.

"Facing Great Britain we know we we will be up against players that we see every week on the television like [Craig] Bellamy, [Ryan] Giggs and [Micah] Richards.

"Now we must make sure that we play our own game and show no fear. The first match in the group is always very important so it would be great to start with three points."

After the match against Team GB, Senegal will face Uruguay and UAE in Group A.