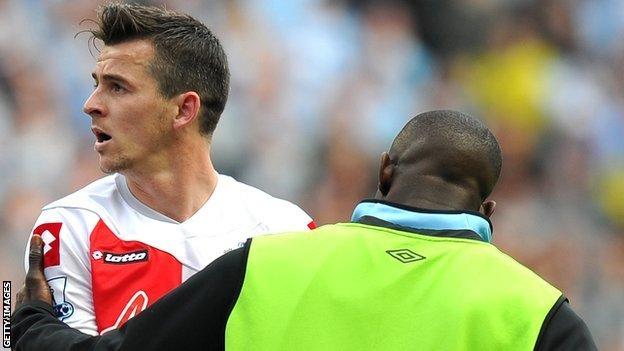 QPR are considering loaning Joey Barton to a Football League club to speed up the serving of his 12-match ban.

Barton was suspended after being sent off against Manchester City in May and then clashing with Sergio Aguero and Vincent Kompany on his way off.

FA rules allow the Loftus Road club to apply for Barton to serve the ban with another club.

QPR are considering all options with regards to the midfielder going out on loan.

Barton will begin training with League Two Fleetwood Town this week as QPR are on a pre-season tour of Malaysia.

The FA would consider any application to transfer the ban, but do have the power to reject it if they feel it as an abuse of the disciplinary process.

Barton could serve his suspension more quickly in the Football League because its clubs play more games over the season than their Premier League counterparts.

Former Manchester City defender Danny Mills, a team-mate of Barton's while he was at City, said it was a shrewd move.

Mills told BBC Sport: "If it was me I would say it was a great idea. It's not against the rules, some might argue it's against the spirit of the game, but until that loophole is closed then why would you not exploit it? You can't play any kind of football during that time.

"It just goes to show that [QPR] realise Joey Barton is a good player, no matter what you think of him and what he's done. He has a value. If they can get him back sooner, whether that be to move him on or to keep him, then from QPR's point of view, that can only be a good thing."

QPR are not scheduled to play their 12th Premier League game of the season until 17 November, although they could feature in three Capital One Cup ties in that time, which would also count towards the ban.

Championship clubs are due to play their 12th league game on the midweek of 23 and 24 October, while teams in League One and League Two are set to reach that stage of the season on 13 October, subject to postponements for international call-ups.

Clubs in the Football League could also play up to four Capital One Cup ties in that time, which again would count towards the suspension. League One and Two clubs will also play in the Johnstone's Paint Trophy.

Barton received his ban, together with a £75,000 fine, as a result of his behaviour during QPR's 3-2 defeat at the Etihad Stadium on 13 May.

The midfielder was initially shown a red card for an off-the-ball clash with City striker Carlos Tevez.

He received a four-match ban for that offence, as it was his second sending off of the season.

The incidents involving Aguero and Kompany came after Barton had been dismissed, meaning they fell outside the jurisdiction of the referee, and resulted in a further eight-match suspension.

Barton, in a blog on his website, wrote: "The possibility of a loan move has been mentioned, where there's been interest from several European clubs and a lot of Championship clubs too, as you may expect."

QPR, the FA and Manchester City all declined to comment.