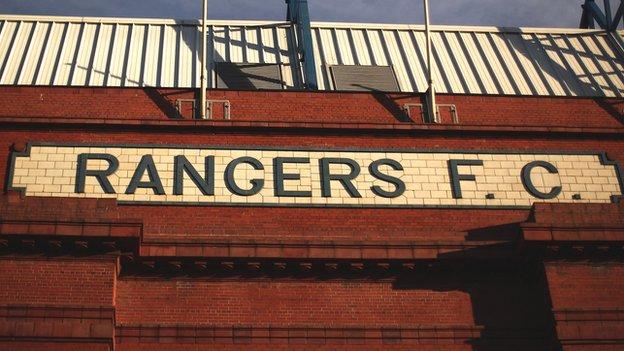 Broad agreement has been reached between the Scottish Premier League and Rangers following further discussions over Scottish FA membership.

Nothing has been signed as yet but BBC Scotland has learned progress has been made and all parties are now hopeful that a deal can be done.

Rangers are due to start their season against Brechin on Sunday.

The Ibrox club have been relaunched after the former incarnation could not be saved from liquidation.

Agreement between five parties - old Rangers, new Rangers, the SFA, SPL and Scottish Football League - is required for the relaunched club to inherit old Rangers' SFA membership, which is required to play in domestic competition, including the Ramsdens Cup tie at Brechin and all league matches.

The SFL have already agreed to place Rangers in Division Three after the club's attempts to replace the old club in the SPL and First Division were unsuccessful.

The main sticking point has been Rangers' insistence that they are not punished following a dual contracts investigation.

The SPL wants an independent commission to rule on whether the previous club's administrators breached regulations with alleged undisclosed payments to players between 2001 and 2010, which could result in the club being stripped of the trophies won during that period.

On Saturday, manager McCoist said he would "never accept" stripping the club of titles.

Rangers had previously indicated that a 12-month signing ban from the SFA for unpaid football debts last season had been accepted.

That had left the question of media rights and the dual contracts investigation as areas to be discussed with SPL chief executive Neil Doncaster.

It has been reported that broadcasters are not keen to sign up to an SPL television deal without having access to Rangers newco's matches as part of the overall offering.

If the SPL is unable to include Rangers' rights in any media proposal, the SFL could lose out on their annual £2m settlement fee that was agreed in 1999 when the top clubs split from the league to form the top-flight.

Several players contracted to the old Rangers refused to join the new club but others allowed their registration to be transferred and SFA membership would likely give manager Ally McCoist the green light to make new signings.