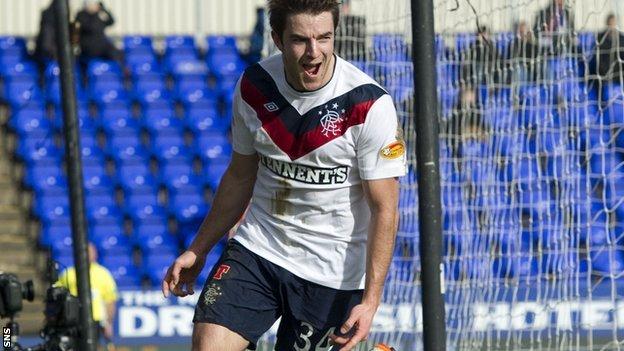 Northern Ireland striker Andy Little is poised to sign for the new Rangers, according to the Ibrox club's website.

The 23-year-old, who came through the former club's youth ranks but was on loan to Port Vale last year, was out of contract at the end of last season.

But Charles Green, chief executive of parent company Sevco, told the club website: "Andrew Little is coming back to the club.

"We've agreed terms with him and hopefully he will re-sign tomorrow."

Rangers are in negotiations to secure membership of the Scottish Football Association, which is required to allow the new club to start the season against Brechin City in the Ramsden's Cup on Saturday.

And manager Ally McCoist hopes the Northern Irishman, who has made 25 appearances for Rangers, can go straight into his first-team plans.

The news came as former Hearts players Ian Black and Craig Beattie trained with Rangers with a view to signing contracts.

A number of high-profile players refused to have their contracts transferred to the new club from the old Rangers, which could not be saved from liquidation.

Scotland goalkeeper Allan McGregor has been in talks with Besiktas, while Nigeria forward Sone Aluko is reportedly close to a deal with Hull City.

However, defender Dorin Goian remains at Ibrox despite hoping to continue his international career with Romania, as do Scotland full-backs Lee Wallace and Kirk Broadfoot.

Veteran Scotland internationals Lee McCulloch and Neil Alexander are still on the books, as is United States winger Alejandro Bedoya.

"Some of our senior players have agreed to stay with us and that's really commendable, because you couldn't blame them for picking up their bags and going elsewhere," added Green.