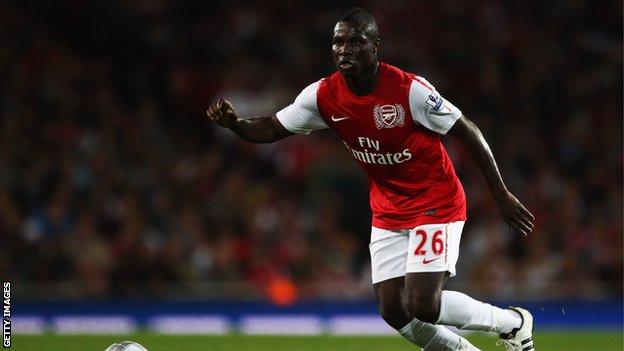 Arsenal midfielder Emmanuel Frimpong has been fined £6,000 by the Football Association following a Twitter post he made last month.

The Ghana-born midfielder admitted a charge of improper conduct and was also warned as to his future behaviour.

According to a statement on the FA website, Frimpong posted a comment "amounting to improper conduct and/or which brought the game into disrepute".

The offending comment also "included a reference to faith".

A Tottenham fan responded with "I prayed you break your arms and legs", which Frimpong retweeted and then allegedly replied with a derogatory term.

Frimpong quickly removed the tweet, but it sparked a debate on the social networking site among supporters of both clubs and did not escape the FA's attention.

He said: "Just wanna Say didn't even no the word is offensive as u hear it all the time but u live and learn from ur mistakes Have a gd afternoon"

The term that the midfielder is believed to have posted has been used to identify Tottenham supporters because of the proportion of Jewish supporters at the club.

A campaign was launched last year by comedian David Baddiel to stamp out use of the word in football chants as it can be viewed as anti-Semitic.

Frimpong, 20, made 14 appearances for Arsenal last season before joining Wolves on loan in January.

However, his season came to an early end in February when he suffered a knee injury in Wolves' 2-1 win over QPR.