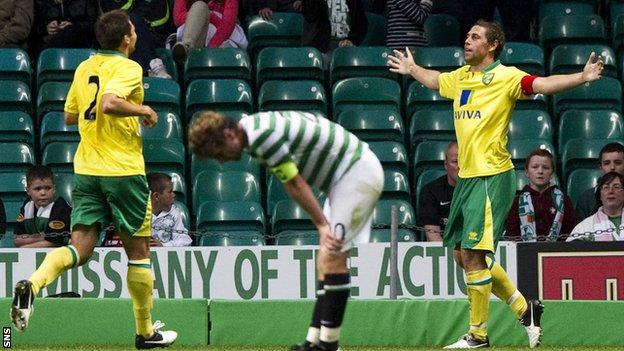 Johan Mjallby admits that Celtic will have to find their scoring form fast after their latest failure to hit the net, in a 1-0 defeat by Norwich City.

HJK Helsinki were at the same time confirming their place as Champions League qualifying opponents with a 9-1 aggregate win over KR Reykjavic.

We think we are getting there. We looked sharper and fitter than before

"Obviously we start at home and we want to score a few goals," said Celtic assistant manager Mjallby.

"The good thing was that we created a few chances against good opposition."

Celtic lost their friendly in Glasgow to an 89th-minute Grant Holt strike while manager Neil Lennon was in Iceland to watch the Finnish champions confirm their place in the third qualifying round with a 2-1 second-leg win.

In contrast, the Scottish champions, who took on the English top-flight outfit days after losing 4-0 to Ajax, have now scored only two goals in five pre-season games.

"We had a lot of the ball and we had five or six clear cut chances, so we should have scored at least two or three goals," said Mjallby.

"It was definitely an improvement, especially the last game.

"We think we are getting there. We looked sharper and fitter than before."

"Whatever you say, there are no easy games in Europe nowadays and every team is well organised and usually Scandinavian teams and Finnish teams are physically very strong," he said.

"Especially at home, when you create chances, you need to take them."

Celtic will have concerns over Kelvin Wilson for the visit by the Finnish champions after the defender was withdrawn before the break at Celtic Park.

Goalkeeper Lukasz Zaluska was also replaced with Fraser Forster just before the break after suffering a cut eye.

"It was just a cut for Lukasz, so it is probably going to be just a few stitches," added Mjallby.

"He's a strong boy, so he should be back tomorrow training."

Meanwhile, it was not a happy return to Scotland for former Rangers defender Steven Whittaker.

Norwich's summer signing was jeered by the Celtic fans when he touched the ball - and when he went off injured in the 21st minute, to be replaced with fellow Scotland international Russell Martin.