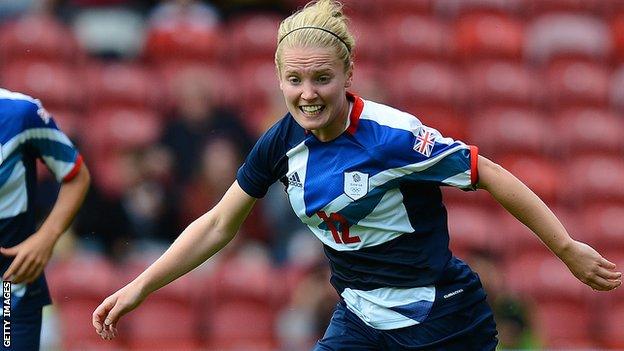 Scotland's Kim Little is looking forward to kicking off the Olympics when Team GB open against New Zealand in Cardiff on Wednesday.

"I am glad to be part of the Great Britain team and hopefully we can do well," said the Arsenal forward.

"A lot of the English girls have played in Euros and World Cups, but for me and Iffy [Dieke] it is completely new.

"But it is one that is very exciting, I wouldn't say daunting, and I can't wait to get out there."

"All of it has been pretty amazing so far.

"Iffy and I have come into a predominantly English Great Britain side, but it has been pretty easy coming into it.

"I have played with quite a lot of them for Arsenal, or against them for Scotland, so we've settled in quite well.

"It is great to come in and play with new players, but playing in that number 10 role behind the strikers has been great - that's where I play for Arsenal and where I love playing, so it's going well."

A crowd of 40,000 is expected at the Millennium Stadium for the first taste of Olympic action and Little aims to get off to a winning start.

"It is an incredible stadium," she said. "I'm sure it will be a great atmosphere.

"It will be a hard-fought match. New Zealand are talented and work very hard, but hopefully our talent will show through and we can win."

Cameroon and Brazil are the other nations Team GB will face in Group E.