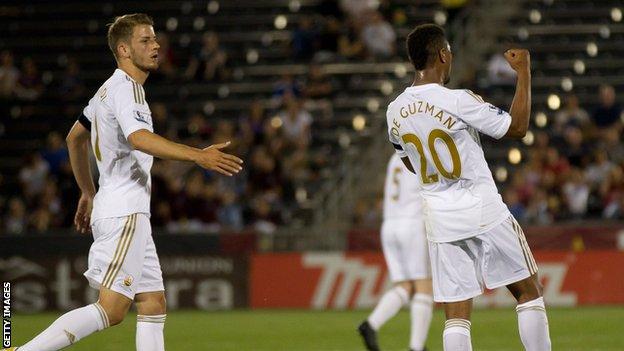 Swansea City went down to Colorado Rapids in the first game of their tour of USA at Dick's Sporting Arena.

Michael Laudrup's side slipped 2-0 behind within 14 minutes after goals from Andre Akpan and Kamani Hill.

But new signing Jonathan de Guzman pulled one back in the second half with a 25-yard free kick.

Leroy Lita went close to equalising late on, but his header scraped the crossbar.

The Swans fielded two sides for each half at the Sporting Arena - a venue based one mile above sea level - in 32 degree heat.

Before kick-off, a minute's silence for the victims of the shooting in Aurora with with captain Garry Monk also placing a wreath on the halfway line.

The Swans went behind after only four minutes with Akpan heading past Gerhard Tremmel from eight yards out.

Leon Britton went close to levelling with a long-range effort that just flew over, but on 14 minutes Hill doubled the lead.

Laudrup made 10 changes at the break with Tremmel remaining in goal. That meant Chico and de Guzman got their first Swansea outings.

And de Guzman finally got a goal back. It came after some individual play from Kemy Agustien and Luke Moore before Lita was fouled. Up stepped de Guzman, who curled his effort into the back of the net.

The Swans now have a game against Ventura County Fusion before ending the three-match tour with a match against MLS outfit San Jose Earthquakes.