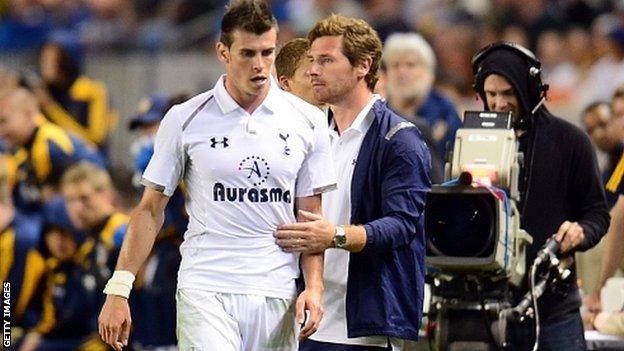 Gareth Bale admits he is "well ahead of schedule" after making a scoring return in Tottenham's 1-1 pre-season friendly draw with Los Angeles Galaxy.

The Wales international pulled out of Team GB's Olympic 18-man squad, who start their London 2012 campaign on Thursday, because of a back injury.

Fifa president Sepp Blatter has warned injured players could be banned if they play for clubs during their Olympics.

But BBC Sport understands the FA will not be making a complaint to Fifa.

The 23-year-old was not fit to play when the original Team GB squad was announced. However he has since made a rapid recovery.

Bale played 74 minutes of the match and later told Spurs TV Online: "After about 65 minutes my calf started to cramp up a bit but it was a good workout. It was one that I needed and it was good to get a goal as well.

"My rehab's gone very well at the club - we are well ahead of schedule.

"I am glad to be back. It's important to get a pre-season under my belt for the season forthcoming so I am just delighted to be back now without any problems."

It is understood the FA will not lodge a formal complaint with Fifa about Bale's appearance for Tottenham and will instead turn its attentions to ensuring the Team GB squad are focused on their opening Olympic match against Senegal on Thursday.

But Blatter said if any complaint was made it would be dealt with: "The principle is that if a club does not release a player then this association can come to Fifa and we will then ban this player during the duration of the Olympics.

Gareth Bale pulled out of the Olympics through injury played for Spurs last night. Once in a lifetime opportunity thrown away

"So far nobody came to Fifa to say we should, but it is a possibility we could ban these players if they are not at the disposal of the national team.

Spurs boss Andre Villas-Boas, who saw David Lopes cancel out Bale's goal, said he was pleased to see the Welsh midfielder return to action: "He came back to us during this week, so [we had to] control the amount of effort he could put in.

"Gareth is extremely young and physically a beast, so he was able to put on the effort, and we extended [his time] because we want him to complete a certain amount of minutes before we start the season."

Villas-Boas did suffer a blow with playmaker Rafael van der Vaart and right-back Kyle Walker having to go off with injury in the side's first match of their US tour.

Spurs will next play Premier League rivals Liverpool in Baltimore on Saturday.