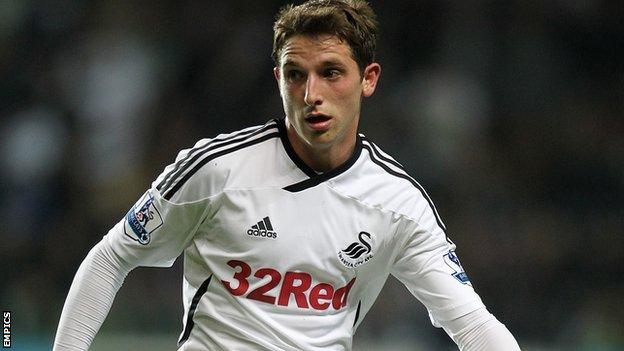 Liverpool and Swansea have opened negotiations over a deal for midfielder Joe Allen, 22, but the Anfield club's opening bid has been rejected.

Liverpool manager Brendan Rodgers offered around £12m plus Jonjo Shelvey on loan, but that deal has been turned down by Swansea chairman Huw Jenkins.

Swansea value Allen at £15m and should Liverpool offer that they would trigger a release clause in his contract.

Rodgers and Allen worked closely during the manager's time in south Wales.

Although the new Liverpool manager has a written agreement with Swansea not to return to his former club to try to sign any of their players for the next 12 months, the Welsh club can waive that clause if a deal is deemed to be in the best interests of the club.

While Swansea do not want to lose Allen, who is currently training with the Team GB Olympic squad, they are aware a move to Liverpool interests the player.

He's a very talented player, which everyone knows

The Welsh club released a statement confirming Liverpool's interest in the playmaker: "Swansea City can confirm that Liverpool have expressed an interest in Joe Allen, despite a written agreement with Liverpool not to approach any players within the 12-month period of former manager Brendan Rodgers leaving for Anfield.

"There has also been interest from other clubs regarding his possible availability and the club is due to speak to Joe, as originally planned, about the situation when he returns from GB duty.

"The club is not prepared to release any details on whether any formal bids have been made at this stage or details of Joe's contract, which are private and confidential.

"The club is extremely disappointed that speculation regarding certain aspects of his contract have been released to the media by parties outside the club.

"Fortunately the club is in a financial position where it does not need to sell any of its players and will continue to work in the best interests of its supporters, who are our priority, and the club to provide new manager Michael Laudrup with the best opportunity to be successful in the forthcoming Premier League campaign."

Swansea are currently in Colorado on a pre-season tour, with Liverpool based in Boston, Massachusetts as they prepare for the new season.

Earlier this month, Rodgers admitted Allen was a target. He said: "He is a very talented player, which everyone knows, but there is nothing more at the moment. When players come to a club such as Liverpool, it's never straightforward.

"There are always other barriers and difficulties. At this moment, there are ongoing negotiations on a few targets."