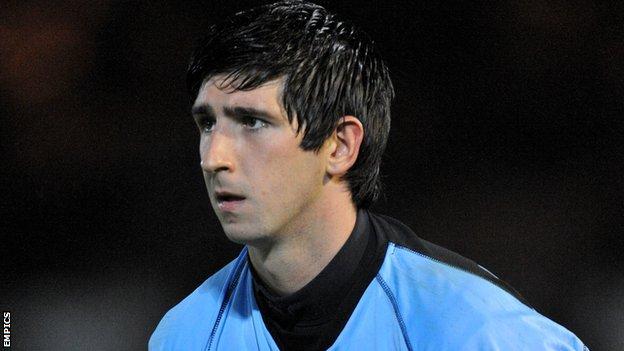 Crewe Alexandra keeper Alan Martin is out to seize his chance at Gresty Road following the pre-season knee injury suffered by number one Steve Phillips.

And, following Phillips' new, extended role as goalkeeping coach at the promoted League One club, he is now the man grooming Martin to take his place.

"But I want to progress into the team. I don't want to sit on the bench."

Martin was only signed on a one-year deal a year ago after initially joining the Alex for a two-week trial following his release by Leeds United.

Having not made an appearance at Leeds, the Scotland Under-21 international's only Football League experience to date came in a seven-match loan spell at Accrington.

Early season at The Alex

He had hoped to push Phillips last season but had to remain patient as the 34-year-old proved one of the cornerstones of Crewe's promotion campaign, not missing a game.

Now, however, after signing a new deal with the League One club, Martin is intent on taking his chance.

"I didn't know anything about Steve's injury when I signed," he added.

"I just want to impress enough to get in the starting line-up, starting with the League Cup game against Hartlepool, followed by the League One opener against Notts County the following Saturday.

"I know I'm only the number one because Steve's injured," said the 23-year-old Scotsman. "But I will be trying to get in that team.

"I want that pressure on my shoulders.

"And Steve's been great with me.

"In the friendlies we've played so far, he's been on the phone the next day to go over any positives and negatives to help me with my game.

"I turned round at one point the other night and he wasn't even watching the game. He was watching what I'm doing and it's good to know that I've got someone like that here to help me."