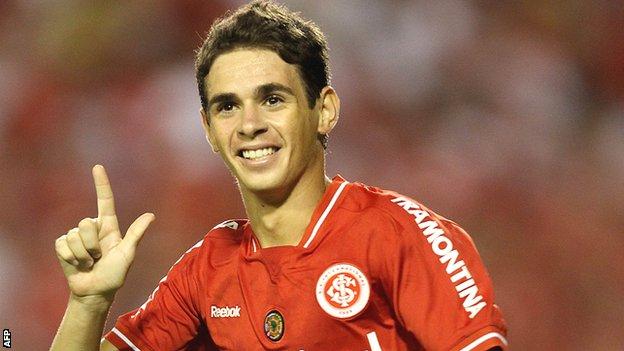 Chelsea have signed Brazil international Oscar for a fee understood to be about £25m.

The 20-year-old midfielder, who has joined the Champions League winners from Internacional, is currently part of his country's Olympic squad.

"He is a fantastic player, one of the youngest to push through to Brazil's national team," Chelsea boss Roberto Di Matteo told the club's website.

"He will add a lot of options and solutions for us in midfield."

Oscar will join up with his new team-mates when Brazil's London 2012 campaign is over and Di Matteo added: "Oscar is a very exciting young talent, a creative midfielder who scores goals."

Chelsea have also signed Marko Marin as well as brothers Eden and Thorgan Hazard this summer.

Playmaking midfielders Marin and Eden Hazard are expected to be in contention for first-team action and the arrival of Oscar will increase the competition for places and the options for Di Matteo.

"It will be a challenge to make sure we have the right balance within the team, so we will have to see how we fit the team together with all the players," said the Chelsea manager.

"The club has always been competitive, looking to improve, get better and fight at the top end of the league so it will only give us a better chance in the Premier League."

Oscar, who has six international caps, came through the Sao Paulo youth set-up before making his first-team debut for the club in 2008 and switching to Internacional in July 2010.

He scored a hat-trick for Brazil in a 3-2 win over Portugal in the Under-20 World Cup final and made his debut for the senior side as a substitute in a 0-0 draw against Argentina in September 2011.

He underwent a medical at Stamford Bridge after arriving in London to compete at the Olympics and helped Brazil beat Great Britain 2-0 in a pre-London 2012 friendly.

Oscar is expected to make his Olympic debut when he plays against Egypt in Cardiff on Thursday.