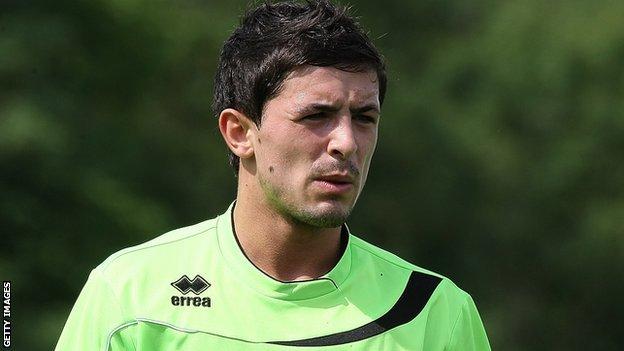 Northampton Town manager Aidy Boothroyd says he will not be improving the offer of a one-year deal to Michael Hoganson.

The 18-year-old former Newcastle player scored twice as the Cobblers beat Cogenhoe 4-0 in a pre-season friendly.

Boothroyd told BBC Northampton: "As much I like and rate him, I won't be held to ransom - not that he's like that, but people around him might be.

"He's got a lot of talent. He's got loads of work to do but is the type of character you want around the place."

He added: "If he doesn't sign it, there'll be lots of other footballers that want to play for this team."

Adebayo Akinfenwa and Alex Nicholls also scored in the win at Compton Park.

The Cobblers are also trialling goalkeepers, with Shane Higgs injured and Neal Kitson back home in the USA until after their next pre-season friendly against Chelsea Under-21s.

"[Former Everton scholar] Connor Roberts may be playing against Chelsea or I may adjust things," said Boothroyd.

"I've been really pleased with him in the last couple of days and he's certainly impressed everybody. Is he a number one starter? No, I don't think he is just yet. But he did very well.

"Neal has got a situation where he's had to go home but he'll be back on Sunday and we'll take it from there."