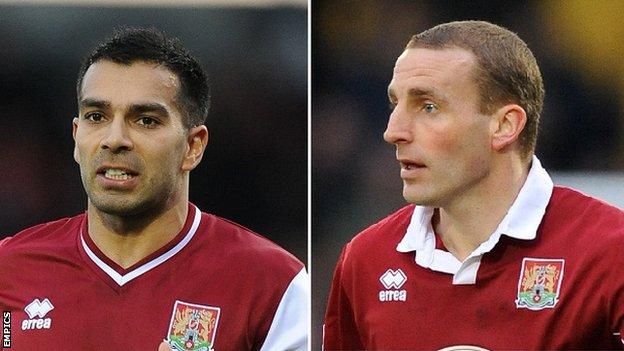 Midfielder Crowe, 33, has made 383 Football League appearances and was released by Cobblers boss Aidy Boothroyd at the end of the season.

Defender Holt, 34, made 220 Cobblers appearances and was also club captain.

If Crowe and Holt can stay fit, they will provide huge experience for Sampson's young Corby squad.

But, more than that, they're composed and reliable players who should prove more than up to the challenges of Blue Square Bet North football.

If Sampson is working on as tight a budget as he says, he has done well to persuade two League Two professionals to Steel Park.

Corby boss Ian Sampson told BBC Northampton: "They've been with us from the beginning of pre-season. Their signing is a massive coup for Corby."

Holt started his career with Oldham Athletic and had spells at Hull, Barnsley, Shrewsbury and Wrexham prior to his move to Northampton in 2006.

He played for the Cobblers in League One during 2006-07 and helped them to a surprise Carling Cup third round win over Liverpool in September 2010, but was released at the end of 2011-12.

Crowe was a trainee at Arsenal and, amongst a host of clubs, won League One promotion with Leeds United and had two spells with the Cobblers.

"Along with Leon McKenzie, there's a thousand league games [played] there," said Sampson.

"Their experience will be invaluable to me and all the young players in the squad.

"It won't be easy for them and they're not going to stroll it, but I'm sure their professionalism and experience should see them through."