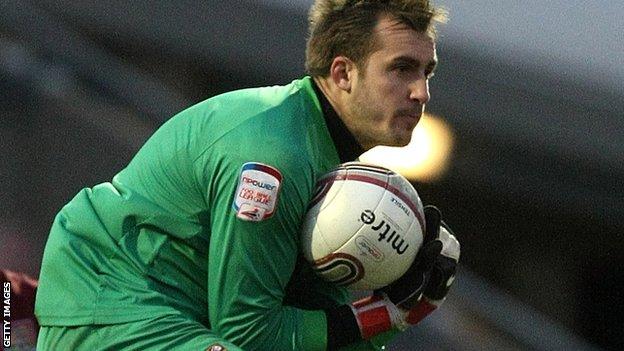 Luton Town have re-signed goalkeeper Dean Brill, three years after he was released following their relegation from the Football League.

The 26-year-old was a free agent after leaving Barnet and has agreed a two-year contract.

"He's been outstanding for us since he joined the squad for pre-season," boss Paul Buckle told the club's website.

"His experience for a player his age is a huge asset to us. Dean knows the club well too, which is another bonus."

He added: "He's a Luton lad who is desperate to get his home-town club back in the Football League."

Brill first joined Luton as a schoolboy and went on to play 97 games for the first team.

He was in the side which beat Scunthorpe 3-2 at Wembley in April 2009 to lift the Johnstone's Paint Trophy.

Following his release the following month, he moved on to Oldham before joining Barnet prior to last season.

He made a crucial injury-time save in the Bees' 2-1 win at Burton Albion in May which saved them from relegation to the Blue Square Bet Premier.

"Anybody who has seen him in action this pre-season will be aware of his presence on the pitch and ability between the posts," added Buckle.