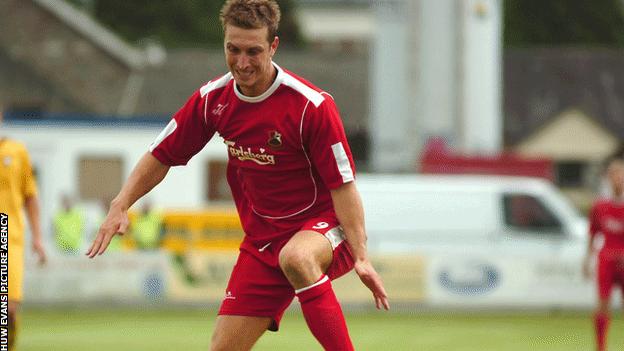 Rhys Griffiths admits he will realise a personal dream if he signs for League Two side Plymouth Argyle.

The 32-year-old, who rejoined Port Talbot after six years at Llanelli in the Welsh Premier League in June, has a clause in his contact which allows him to leave for a Football League club.

"I don't have an awful lot of time left and this would be a great way to end," said Griffiths.

Griffiths scored the only goal in Argyle's pre-season win at Truro City.

I do have things to sort out before I can seriously put pen to paper, but they [Plymouth] have to decide whether I am worth a decent contract

Plymouth Argyle boss Carl Fletcher revealed he had opened discussions with Griffiths about bringing the Welsh striker to Home Park.

Griffiths, who is a fireman, has admitted both he and the League Two outfit have yet to thrash out a deal but is hopeful he will sign his first professional contract.

"I have played in a game and done okay and managed to score a goal," said Griffiths.

"They have to go away and come up with some sort of contract and I have to go to my employees, the Fire Service, and ask if it's okay to have a career-break.

"Without that it's not something I would really consider. I certainly want to return to my job if I do get the opportunity to go down to Plymouth.

"We are both sorting things out at our own ends and then we will talk again.

"I do have things to sort out before I can seriously put pen to paper, but they have to decide whether I am worth a decent contract.

"I am hoping that they do because it's something I have always wanted to do and I would like to play in the Football League before my career comes to an end."

But Fletcher says he has been impressed by the way the former Carmarthen Town and Haverfordwest front man has acquitted himself at Argyle.

"His record for scoring goals speaks for itself, I think it's 180 in 181 games and at whatever level that's a lot of goals," said the former Wales international.

"He came in Tuesday and didn't look out of place. He could have had maybe three goals on another day and in terms of a triallist he's come in and shown what he can do."