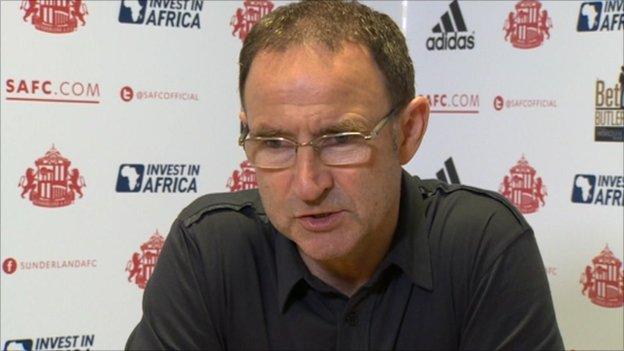 Sunderland boss Martin O'Neill has said there will be no clues to his line-up for the Premier League opener against Arsenal during the pre-season campaign.

The Black Cats boss will rotate his squad for the friendlies with those involved in the European Championships yet to return to training.

O'Neill told BBC Newcastle: "I'll make changes when the squad is together.

"A number of players will be used throughout, so I wouldn't read much into the team on the field."

He added: "We need to work out the minutes the players have played so when the season hits us against Arsenal they are as prepared as they can be."

Having completed a brace of games in the Korea-based Peace Cup competition, resulting in a defeat by Seongnam and a dramatic win against Groningen, O'Neill's side return to home soil for a trio of fixtures.

Hartlepool United, Derby County and the Northern Irishman's former club Leicester City provide the opposition away from the Stadium of Light, with negotiations continuing over a proposed fixture against Helsingborg.

"I'm looking forward to the Hartlepool game, in terms of the senior players getting time on the pitch before the season starts that will be important for them.

"However when I see the players back that I gave more time to, you'll see the pre season will be really into full swing and the players that had the extra time off will generally get fit in decent time.

"I'm looking forward to getting those players back and adding some players to compliment the squad."