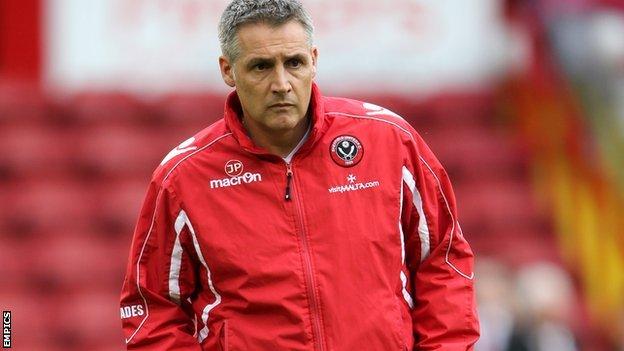 Sheffield United academy manager John Pemberton has rejected the opportunity to be the new manager of Crawley Town.

The Red Devils approached the 47-year-old on Tuesday but he has decided to remain with the Blades.

"I have a great relationship with Sheffield United and I am enjoying the work I am doing here," he told BBC Radio Sheffield.

"I felt at this moment it was important to show loyalty because we are trying to build something in difficult times."

He added: "I'm very flattered but I didn't feel that this was the right time to leave the club."

Aldershot boss Dean Holdsworth turned down the chance to take over at the League One club earlier this week.

The Broadfield Stadium side have been managerless since Sean O'Driscoll left for Nottingham Forest last Thursday.

O'Driscoll never even managed a Crawley match, having only taken over in May. Craig Brewster guided the Red Devils to promotion as caretaker after Steve Evans left for Rotherham in April.