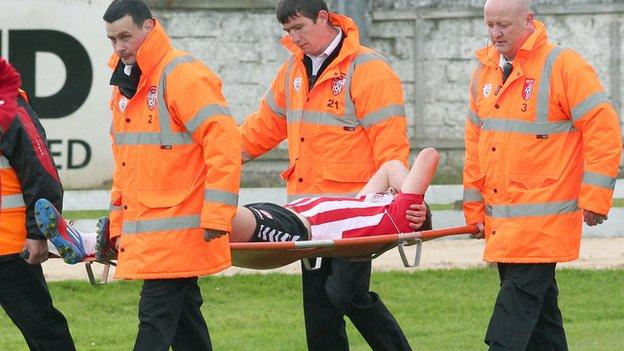 The Candystripes missed chances and were denied a late penalty and a bad night was compounded by Patrick McEleney's being stretchered off with a serious-looking injury.

Mark Farren appeared to be bundled over on 87 but Derry protests were ignored.

Former Derry boss Kenny went into the game under some pressure after Rovers' European exit earlier in the week.

The defending champions have been struggling in the Airtricity League this season and badly needed a win to keep any remote title hopes alive while Derry's form has plummeted after a promising start to the campaign.

The Candystripes made a promising start with Barry Molloy firing just over the crossbar on six minutes after a good run by Stephen McLaughlin.

Rovers' Craig Sives then appeared fortunate to be handed only a yellow card in the 12th minute after hauling down David McDaid as he looked set to break clear of the Rovers defence.

At the other end, Gerard Doherty came to Derry's rescue as he denied Gary Twigg after a dreadful backpass by Dermot McCaffrey.

Derry's injury nightmare this season continued as the influential McEleney was stretchered off on 30 minutes with what appeared to be a serious-looking leg injury.

The second half was less pleasing on the eye although Finn's goal was a cracking strike as he let fly from 20 yards to beat Doherty with the help of a post.

Twigg missed a chance to extend Rovers' lead before McLaughlin fired across the face of goal at the other end.

Farren appeared to be bundled over the in Rovers area three minutes from time but referee Derek Tomney waved aside the Derry protests.

The defeat drops Derry to seventh place in the table and they are now 13 points behind leaders Sligo Rovers, who also have two games in hand on the Candystripes.